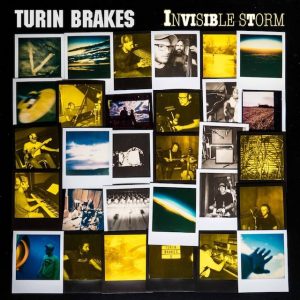 You don’t make seven albums without being liked – and since their debut The Optimist, a massive 16 years ago, Turin Brakes have quietly but effectively built a following many bands would give their drum kits for.

Their secret is straightforward. Working by deceptively easy communication of simple lyrics, the quartet prove the old adage that less is so often more, especially in pop. They work by stealth, too – so if you give Invisible Storm three listens the guarantee is that at least four of the tunes here will be etched into your consciousness by the end.

The band’s other secret is judging the mood of their listeners. The uncertain political climate of the times does not go unnoticed, and nor does the observation that most people walk down the street with something of a front, masking the day to day wars being fought on the inside – their own ‘invisible storm’. This aspect of the human condition has preoccupied singer Olly Knights for years, and the band’s immediate return to the studio after 2016’s upbeat Lost Property was a chance to explore this in more depth.

“Now we let the loonies run the show/great white apes with nuclear coats”, he observes on Would You Be Mine, before getting down to issues closer at hand, pulling at the heart strings. Meanwhile the closing Don’t Know Much taps into our Stranger Things obsession of the last two years, referring to ‘life inside the upside down’ before ending on a reflective note. Always is a direct reassurance, appealing to the listener’s heart with its proclamation that ‘to get to easy you gotta go through hard’.

Nothing groundbreaking there, you might think, but it is all done with a down to earth approach that is at once appealing. It also masks some of the subtle but lasting musical techniques the band use to ensure their songs sit just far enough left of centre. The harmonies of Always have an alternative slant, arriving ‘home’ in a roundabout way that suggests the brain is moving outside its normal orbit. Lost In The Woods – in its verse at least – feels like a Tears For Fears update, but with those ‘high highs and low lows’ of the chorus it makes its own memorable place.

Would You Be Mine sets the breezy tone of the album, its lyrics balanced by a lovely, wide open guitar sound. Deep Sea Diver offers a nice balance to the bluster, with an intimate acoustic exploration of much more private thoughts. Positivity ultimately wins in the end though, and the subtle uplift of songs such as Life Forms is where the band’s mood is ultimately headed.

You will gather from this that Turin Brakes are not trying to reinvent the popular music wheel. Nor do they need to, for their established fans know and love the lack of pretence in an approach that speaks to the person on the street at almost every turn. The foursome are rather like the band you know down the pub – and their tunes and sentiments make them equally appealing on the radio too.