TV On The Radio – Nine Types Of Light 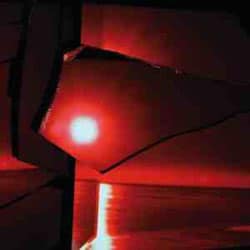 For their fourth proper studio album Nine Types Of Light, TV On The Radio left the comfort and familiarity of Brooklyn’s bohemian scene to record at guitarist Dave Sitek’s home studio in Los Angeles. They recorded tracks in the kitchen in between rounds of ping-pong and plates of barbecue. It’s an album of love songs. At turns warm and fuzzy, whimsical and forlorn, it’s certainly a change for this group of werewolf New Yorkers.

Of the experience of spending three months in an LA hotel just off Rodeo Drive – New York’s metropolitan polar opposite if ever there was one – vocalist Tunde Adebimpe has said: “It wasn’t so much squalor as it was… if I were a door-to-door salesman, it’s where I would kill myself.”

But, even as strangers in a strange land, TV On The Radio have created in Nine Types Of Light their most optimistic and wide-eyed work to date. And even in its experimental tautness – the constant tension between buzz-saw guitars, bombastic horns, drum-bass grooves that sound in danger of coming apart at the seams – the album is Sitek’s finest, most accessible production work yet.

These may be love songs on the surface, but they’re love songs the way only TVOTR can do them. The sense of tension in these tracks is nearly palpable. No Future Shock, for instance pairs a sense of futureless despair with cascading horns and spastic vocals, all over a driving, escalating beat that shifts and changes as it grow. Follow this with the lush simplicity of Killer Crane (which hits in much the same way as Family Tree did on Dear Science), which takes a break midway through for a harshly plucked banjo aside, and Kyp Malone’s revelation: “In isolation, a transformation.”

The album’s title sums up the band’s approach nicely. “It struck me as odd that that phrase,” Adebimpe has said of Nine Types Of Light. “When you keep it to just nine types of light, it’s excluding a billion other types of light. I like how it’s a little slippery.” In focusing their attack on the loose and general concept of love songs, the band has seemingly excluded a host of other topics, but everything casts its shade on the complex soundscape here; amidst the comfortable handholding of a dear loved one, there’s a constant barrage of attacks from all sides. And in the harried and frenetic – often hyperactive and nearly schizophrenic – sounds here, the paranoia and complexity of love in an age of government shutdowns and no-fly zones feels nearly tangible.

There are even a few brief forays into avant-garde hip-hop territory, most notably Repetion and Caffeinated Consciousness. On Repetition, the vocal attack sounds manic and possessed, arcing through an increasingly intense yelled refrain: “My repetition! My repetition is this!” Caffeinated Consciousness works in the same way as 2008’s Dancing Choose, Sitek’s guitar acting as a foil for the distorted, fire-and-brimstone vocals.

Somehow, four albums in, TV On The Radio show no signs of relenting in chasing the sounds in their heads. Nine Types Of Light sounds as fresh in today’s climate as Dear Science did two years ago. Really, they’re ahead of their time, and they just might always be. Each listen reveals another layer, and the album wears incredibly well over obsessive revisiting. Nine Types Of Light is another strong early contender for album of the year.