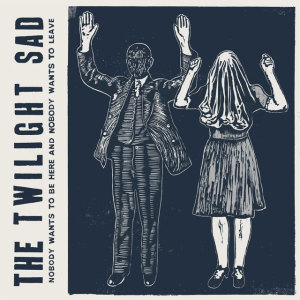 Nobody Wants To Be Here And Nobody Wants To Leave, as a statement, heavily implies a sense of entrapment; burrowing deep resentment and anger underneath the surface because the idea of walking away seems scary or difficult.

It’s a feeling that The Twilight Sad, especially in the wake of the disappointing No One Can Ever Know, seem all too aware of. Lead singer James Graham has admitted in the run-up to this record’s release that it took a long time to get the ball rolling on writing the band’s fourth album – to the point where questions were being asked about whether or not to carry on. They also suffered the departure of touring keyboard player Martin Doherty, who is now enjoying much more global success as one third of CHVRCHES. In the end, it was the combination of positive reaction to live performances of their debut, Fourteen Autumns & Fifteen Winters, and a relatively straightforward recording process that reinvigorated them.

The real relief of Nobody Wants To Be Here And Nobody Wants To Leave is that the songs themselves sound satisfyingly huge and cathartic. It’s a reminder of why they were so adored in the first place. The pay-off towards the end of Leave The House, which up to that point sounds quietly sinister and scary, turns it into a terrifying beast. Elsewhere, In Nowheres is a monster of a song – sludgy, distorted guitars are the star of the show – with Graham’s echoed vocals battling against all the sonic elements. In the title track, he’s practically yelping over shoegazy guitars and a tinny drum machine.

Graham’s best moment comes at the very end. Sometimes I Wished I Could Fall Asleep is stark in its honesty and its minimalism, which says a lot for The Twilight Sad given how bleak their tunes are anyway. Lyrically, it’s the most open he has ever been (“You don’t want me anymore/You don’t need me anymore/It’s not the same/You’re to blame”) and it makes for a brutal knock out blow.

It’s not a total return to loud guitars though. The electronics are still a part of The Twilight Sad’s aesthetic but those elements are used sparingly. Whereas the dominance of synths made just about everything else on No One Can Ever Know seem insignificant, they’re now being used for atmosphere and the results are far more effective. It Never Was The Same’s keyboards act as a gloomy cloud, hovering throughout.

Even though they don’t really do big hooks or layer their tracks with poppy elements, there are certainly songs that are clearer and less foreboding. If there’s a problem with this record, it’s that those songs sound too similar. The driving Drown So I Can Watch has a hummable melody, but then so does Last January. Pills I Swallow in particular feels too simplistic, especially given the rest of side two, which is far more powerful and emotionally charged.

Those flaws don’t diminish the fact that this is an enjoyable comeback. Whilst not perfect, Nobody Wants To Be Here And Nobody Wants To Leave is, as the cliché goes, a return to form and the album of a band that has rediscovered what they’re good at.