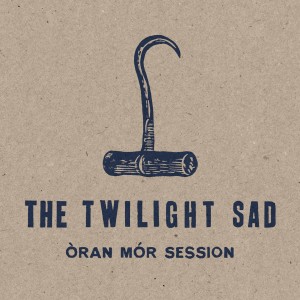 Last year’s excellent Nobody Wants To Be Here And Nobody Wants To Leave, The Twilight Sad’s fourth studio album, marked a return to form for the much overlooked Scottish three-piece. With the collection benefitting from a foreboding atmosphere, it was no surprise to see it acquiring plenty of high praise; the Òran Mór Session LP sees the band mostly revisit the same songs for reworked, stripped-back versions.

When band’s release album’s such as acoustic versions of their songs (see Band Of Horses’ Acoustic At The Ryman from 2014, or going back further, The Cure’s Greatest Hits bonus disc of sparse versions of their hit singles) it’s fair to ask the question, why? Even the best songs in any band’s catalogue usually fall short when stripped down, compared to their full versions. So is it pretentious to release such collections? Or perhaps it’s driven by the record label and some greedy executive? The difference between the two examples given is that at least The Cure’s efforts were released as a bonus collection, and not a standalone effort.

It’s obvious that NWTBHANWTL contained very good songs, but the reliance on the atmospherics created by synths, pounding basslines and heavy guitar passages added considerable weight to these songs; when you take all that away, it leaves a hole. The first two tracks here – the title track from 2014’s album and Last January differ so very little that you could actually miss the start of the second song completely if you weren’t paying strict attention. As good as they are, the effects that get left behind in these new versions means they fall well short of the originals with the wall of noise that drove the title track being absent hugely noticeable. Likewise, the missing powerful bass, thunderous drums and heavy chord changes of It Never Was The Same leave another void; this is tempered somewhat by the strong vocal melody, but it still feels empty in comparison.

Drown So I Can Watch was driven by a thumping bassline – no surprise to know that it’s another big loss this time round. And the tinkly melody that made Pills I Swallow such a delightful track is again sadly missing. Leave The House was minimal anyway but the thunderous conclusion is another noticeable absentee; in this instance, the excellent, haunting piano does, however, add a new dimension to the song in decent fashion and it comes after seven tracks of very similar sounding versions so offers some most welcome respite – isn’t this exactly what these forays should focus on, something new? A cover of Arthur Russell’s I Couldn’t Say It To Your Face closes the collection and it’s telling that it’s one of the best tracks here, its accordion sounding synths again creating a much needed change.

Individually, these songs work, but imagine a full-on gig where they’re thumping out their best tracks – full band versions – and then you get a breather when they break off, leaving, say, just James Graham and Andy MacFarlane on-stage and they knock out one of these in its simplest form, mesmerising vocals and wiry, atmospheric guitar – perfect. But if they then continued in the same manner, how long before the crowd start screaming for the heavy wall of guitar noise, synths, drums, pounding bass? Probably not that long. This is for purists only; they should probably have taken a leaf out of The Cure’s book rather than Band Of Horses’. All this makes you want to do is to stick on last year’s album to remind yourself how brilliant it is, and if you don’t already know, buy that instead.