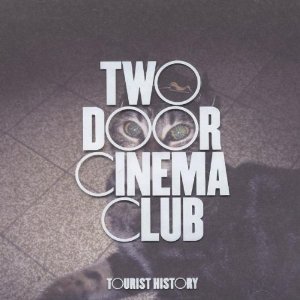 So, as it turns out, the BBC’s Sound Of 2010 is much as the same as the Sound of 2009. We have quirky female songstresses, electropop types, grime MCs and angular indie merchants.

It’s this latter category that Belfast’s Two Door Cinema Club, who were named on the longlist of Sound of 2010 but who failed to make the top 5, fall into. And if you’re wondering whether the world really needs another Foals and Bloc Party hybrid, you’d be forgiven.

Except that Two Door Cinema Club are a much better prospect than the generic indie guitar trio that they appear at first glance to be. Their songs are instantly likeable and catchy, they sound genuinely exciting at times and already seem like pop stars in waiting.

They don’t sound particularly original or revolutionary, but at least they’re not pretending to be. And when they produce songs as accomplished and confident as I Can Talk or Something Good Can Work, it’s impossible not to fall under their spell.

The latter, one of their earliest singles, is one of the best tracks here, with shades of Vampire Weekend in the guitar riff and an addictively feelgood, uplifting chorus. I Can Talk, another single, is similarly terrific – even if the intro is seemingly lifted from Futureheads‘ Hounds Of Love and the whole tune sounds very reminiscent of Foals’ Hummer.

There’s a confidence and swagger that’s very pleasing – every so often, a track will burst into life. Take Undercover Martyn for instance, which after charming with slinky verses and a bemusing yet endearing chorus of “to the basement, people!” suddenly explodes into guitar-fueled colour to genuinely thrilling effect.

There are some slow burners too, such as Do You Want It All, in which Alex Trimble’s affecting falsetto sings a naggingly hypnotic chorus, before transforming into a coda which should have indie discos across the country packing the dancefloors. The fantastically titled Eat That Up It’s Good For You meanwhile successfully melds eerie electronica with some African influenced guitar licks.

If there’s a problem that Two Door Cinema Club may experience, it’ll be being pigeonholed with other bands such as Delphic (even though there’s far more of a guitar influence here than with their Mancunian contemporaries). Then there’s moments like Come Back Home which sound almost too like White Lies for comfort, but which is shot through with so much energy and confidence that it’s hard not to sing along with.

Overall, this is a fine debut album that does exactly what it says on the tin. While they won’t win any points for innovation, Two Door Cinema Club are going to find their way into a lot of people’s hearts during 2010.