by John Murphy
published: 17 May 2019 in Album Reviews
Tweet 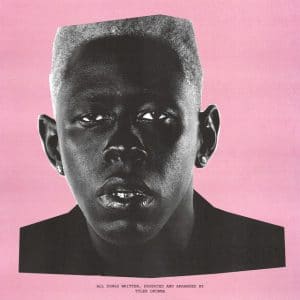 It seems a very long time ago, those heady days of 2009 when Odd Future briefly threatened the collapse of Western civilization as we know it. The situation became so intense in 2015 that the then Home Secretary, one Theresa May, banned the collective’s co-founder Tyler, The Creator from entering the country on the grounds that his very presence was likely to incite violence.

So it seems somewhat poetic that, as we enter the dying days of May’s premiership, Tyler is allowed back into the country to promote his fifth solo album, Igor. It’s a record that comes with all the track titles in capital letters, and a press release in which Tyler beseeches the listener to concentrate only on the album, “FRONT TO BACK” with “NO PHONES” to be looked at for the duration. You get the impression that Tyler’s Caps Lock key may need looking at.

Tyler has also warned that fans should not “go into this expecting a rap album”, but it will come as no great surprise to learn Igor is not the excuse for showcasing a hitherto unannounced ukulele hobby. It is, in fact, a natural progression from his last album Flower Boy – melodic, accessible, sometimes jarring and disorientating and with a whole cast list of famous names on support. Kanye West pops up uncredited on Puppet, Solange and La Roux can be heard performing backing vocals on a couple of tracks, British rapper Slowthai guests on What’s Good, and that is indeed Pharrell Williams warbling away on the closing track Are We Still Friends.

Yet despite the calibre of the guest list, there’s no doubt that this is a Tyler, The Creator album. Igor’s Theme introduces itself with a barrage of synths before developing into a nicely funky, piano-led opener. Earfquake really kicks things off though, a song rejected by both Justin Bieber and Rihanna before Tyler decided to record it himself. His vocals are softer than before, and there’s the same sort of yearning running through the track that his old bandmate Frank Ocean is so good at conveying.

Earfquake also introduces the loose concept that runs through Igor of a love triangle that Tyler’s become involved in. It’s not until about halfway through that the twist becomes apparent – that it’s the male section of the triangle who Tyler’s in love with. Running Out Of Time has lines like “take your mask off, I need her out the picture… I know the real you”) while New Magic Wand sees him staring at a photo of the couple while musing “I need to get her out the picture, she’s really fuckin’ up my frame”.

Concept albums rarely work this well, but Igor has a flow to it that means you can’t tear yourself away. A lot of this is due to the production (from Tyler himself) – Running Out Of Time is gorgeously lush and languid, I Think (which owes a huge debt to Kanye West’s Stronger) is infectiously funky and danceable until the bridge slows the song down and takes it spinning off into a whole new direction, and the Al Green sample on Are We Still Friends makes the song sound absolutely huge.

It’s an intriguing album with few dips (only Kanye’s verse on Puppet sounds rather phoned in and lacklustre), and it adds up to Tyler, The Creator’s best work to date. He may not be threatening Western civilization anymore, but he is creating something far more interesting.

Tyler The Creator MP3s or CDs

Tyler The Creator on Spotify