U2 – Songs Of Innocence 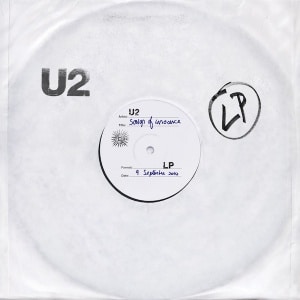 Unless you’ve been living in a hermetically sealed cave for the last week or so, you will of course already know everything about the new U2 album. You will know that it has been forcibly dropped into the iCloud accounts of millions of users of Apple’s iTunes software. You will probably also be aware that whilst it arrives ‘free’ for the consumer (whether they want it or not), it certainly has not come free for Apple.

It would be very easy to turn a review of this record into a discussion of whether bedding up with the major player in a heavily distorted digital music market is a sensible strategy, especially given all that has been unearthed about Apple’s employment practices. Yet I inevitably write this using a Macbook Pro, and everyone makes compromises to a greater or lesser degree in service of their personal and professional lives. Of course, the faults of this deal will be felt much more keenly due to Bono’s unyielding sanctimony on socio-political matters and his vast personal wealth (not least as to whether this serves to further devalue creative currency for bands with less reach and freedom). It is hard to see other politically active superstars (Bruce Springsteen, R.E.M.) doing this.

Let us, however, focus on the music. It is here that U2 have been so systematically indulged for much of the last 15 years. This week, it has suddenly become popular for the press to give the band a good kicking – but it could be a challenge to find a truly critical review of their more recent albums in a broadsheet or mainstream music magazine. Whereas R.E.M. were hurt badly by negative writing despite some excellent records (and even Around The Sun is streets ahead of U2’s post-2000 output), U2 are still too often presented as retaining some artistic merit behind their corporate face. This is in spite of some truly lazy writing that has veered from the crassly manipulative (Beautiful Day, Vertigo) to the benign and bland (Stuck In A Moment) via the unfathomably ludicrous (Get On Your Boots and Elevation – two of the worst mainstream rock songs in living memory).

U2 were once at least a good band. They had distinctive qualities to their sound (not least The Edge’s strafing guitar sound and Larry Mullen Jr’s propulsive drumming) and whilst they have always had a tendency for earnestness, they at least once matched that with searing music, memorable melodies and palpable conviction. Bono and The Edge wrote a superb song for Roy Orbison’s comeback album (She’s A Mystery To Me). Achtung Baby and Zooropa were flawed, but they at least presented a band keen to experiment and provoke (The Fly, by way of contrast with the aforementioned, still sounds like one of the strangest and most imaginative Number 1 hit singles of the ’90s).

Songs Of Innocence (its title hinting not only at William Blake’s poems but also David Axelrod’s near namesake masterpiece from 1968 – has Bono even heard it?) is a neutered, soporific album. Whilst it doesn’t contain anything quite as cringeworthy as Get On Your Boots, it continues Bono’s cloying journey through trite platitudes and pseudo-spiritualism. Everything, be it human relationships or early experiences with music, is bathed in a sacred, perhaps even messianic aura. We get The ‘Miracle’ (Of Joey Ramone) (whose unmediated directness was so far from what U2 have produced here) and we get the cod-mysticism of Song For Someone. California (There Is No End To Love) even begins with the sound of church bells. Bono is particularly fond of parentheses in these song titles, and this only adds to the sense of an artist struggling for false profundity. Bono just does not seem to have the ability of Bob Dylan or Leonard Cohen in exploring spiritual matters with genuine insight.

Musically, Songs Of Innocence is remarkably consistent. It is impeccably produced and sheened, but it sounds polished to the extent of being soulless. Listen to Iris (Hold Me Close), no doubt a very sincere song, and one that contains many of the signature elements of U2’s sound. A quick listen to Where The Streets Have No Name or I Will Follow will instantly betray a real difference, however. The fire and energy that once fuelled U2 seems to have been clinically removed. Volcano at least allows a rare moment of rawness to creep in, with Adam Clayton’s plectrum plucked electric bass sounding slightly gritty. But the chorus, and the infuriating chant of ‘You! Are! Rock n’ Roll!’ are cliched to the point of embarrassment.

Perhaps the most infuriating element of Songs Of Innocence is that its most egregious moment might well also be its most musically agreeable. The band have opted to conclude this album with a song called The Troubles, as loaded a title as they could possibly have chosen. Sunday Bloody Sunday it is not – it completely sidesteps any of the implications of that term and instead proves to be another dissection of a broken relationship (“You’re not my trouble any more”). Nevertheless, it at least has an interesting, loping rhythm, some atmospheric sound design and a gospel-tinged vocal line that sticks in the mind.

Almost every song has a made to order, over-projected chorus custom made for next year’s inevitable jaunt around the world’s sports stadiums. There are some big guitar riffs (Cedarwood Road, especially), but even these seem to dissipate into tepid music and uninspired, boring melody lines. Much of the music seems desperate to soar but never really seems to take flight. Every Breaking Wave merely plods mundanely along. Lyrically, the platitudes never seem to be far away and it would be a lot more comfortable for Bono to discuss feelings were the music to evoke any real feeling at all. California (There Is No End To Love) has a line about falling into a ‘shiny sea’ and this seems to sum up everything about Songs Of Innocence. It is that ‘shiny sea’, reflecting its own self regard and encompassing everything above and beneath it.