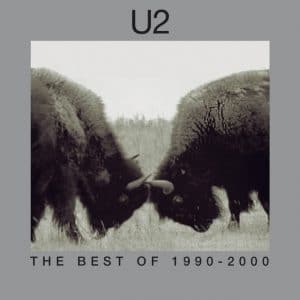 The Beatles had two greatest hits – the red and blue albums – spanning their short but fruitful career. U2, the Nouveau Fab Four, after singing on top of a roof just like, gee, The Beatles, are about to release the second tome (The Mature Years) of their own creatively rich musical career.

While the Best Of 1980-1990 (The Rebel Years) flowed smoothly and included the singles as originally released and B-sides, the second volume, spanning the last decade of the 20th century, is packed with mixes, remixes, new tracks and a surprising track listing. This is what I call good marketing and ensured sales.

U2 are not simply content by just throwing together some hit singles and calling it a greatest hits album. Oh no, they don’t do things the easy way.Most of the tracks are remixed, some beyond recognition. Perhaps the tracks which have undergone the most changes are the excellent Discothéque, Staring At The Sun, Gone and If God Will Send His Angels, all from the Pop album.

The former two are more guitar-gauged, maybe more fitting for a band that reclaimed its rock status last year? Nah, for the other tracks are remixed into dance tracks. An ironic twist that only U2 knows how to do -and get away with. But hey, where’s MoFo, Bono’s favourite from Pop? Please, The Fly and Elevation are also remarkably absent. Fans who expected to see all their hit singles lined up will have to go back and listen to the corresponding albums.

The self-indulgent post-Zooropa side project The Passengers is also represented by the hit opera-rock track Miss Sarajevo and the hauntingly sensual Your Blue Room, apparently the only track where bassist Adam Clayton’s voice is known to have been recorded.

The album also has two new tracks, including the current single Electrical Storm and Gangs of New York theme The Hands That Built America. The latter needs time to mature and grow on you. Needless to say, not one of their best creations. Another soundtrack is Hold Me, Thrill Me, Kiss Me, Kill Me, from a Batman sequel starring Val Kilmer, dating from Bono’s McPhisto phase. For that’s another way to keep track of U2’s career: through the various alter egos of the band’s charismatic leader. TheFly, McPhisto, Techno-cum-Michelin Man (from the embarrassing ‘We’re a pop band’ period) and the perennial Rock Star With a Conscience. A jack of all egos, he is.

The B-sides label is misleading, for the second disc intermingles with A-side tracks. It in fact includes some remixes of A-side tracks, like Discothéque and Numb. But do we really need another version ofElectrical Storm, which doesn’t sound much different than the A-side mix? This is where it all foiled, I suppose. They could’ve replaced it by The Fly or Elevation, for example.

But the B-sides is also packed with more surprising remixes. Happiness is a Warm Gun, the cover of a Beatles classic, includes a rap. Yup, U2 have remained so relevant to the chameleon music scene that they even experimented with a pseudo-rap, or so it seems. But don’t anticipate a P Diddy mix soon. Not yet, anyway. Maybe he’ll remix U2’s cover of the The Rolling Stones hit Paint It Black. Should be more interesting than The Hands That Built America.

By far, the greatest B-sides are the upbeat Salomé (do I detect -sorry die-hard U2ers – an element of Duran Duran‘s Save A Prayer towards the end, only a few BPMs faster?) and the Lady With the SpinningHead, on which Bono’s vox possesses the resonance and clarity of Echo & The Bunnymen frontman Ian McCulloch’s voice.

Both volumes of U2’s Best Ofs are a study of their evolution as a band, perhaps this one more than the first volume. However, U2 could’ve just re-released Achtung Baby, a piece of rock’n’roll masterpiece, or any other post 1990 album for that matter, and called it a greatest hits album. But then, we wouldn’t have had Lady With the Spinning Head.