UB40 – Getting Over The Storm 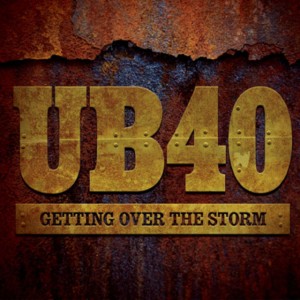 Cover versions more than often attract much scorn, occasionally even anger, as original records are completely reworked or, worse still, hardly changed at all, adding very little – if anything – to the originals.

Birmingham’s UB40, however, have made a career out of successful covers since their formation in 1978. The Labour Of Love series, most recently added to in 2010 with the fourth such offering, has achieved sales galore, most notably from the first album: containing a Number 1 single – their version of Neil Diamond’s Red, Red Wine – it included other memorable moments such as Cherry Oh Baby and Please Don’t Make Me Cry, thus creating one of the best-selling covers albums of all time. This went some way towards their staggering career sales tally that tops out somewhere between 80 and 120 million depending on whom you believe.

But things have changed in the years since. Iconic vocalist Ali Campbell left, initially reported as being due to solo career aspirations, with his brother Duncan joining to take over lead vocals. It later transpired that problems with the band’s financial management had also contributed to Ali’s departure, and subsequent financial problems then ensued after the band’s record label ran into trouble. This culminated in several of the original members being declared bankrupt – all current earnings from record sales and gigs are handed straight to the administrator.

Getting Over The Storm takes a turn towards country music for its inspiration, with saxophonist Brian Travers believing the two genres sit well together and resident MC, Astro, suggesting that country music and Jamaica are finely entwined. The catalyst for this album – the band’s 20th studio effort – originated from the band’s recording of Bob Dylan’s I’ll Be Your Baby Tonight with the late Robert Palmer in 1990. At the same time, Palmer and the band also recorded the Randy Travis song On The Other Hand, and that appears here although vocals were re-recorded after Palmer’s estate refused to permit the use of his vocal.

As would be expected from a bunch of guys in their late 50s the material here is undeniably safe. Opener Midnight Rider begins with a typical UB40 reggae beat and ‘electric shock’ organ alongside a fuller synth backed chorus and Campbell’s repeated line of “I ain’t gonna let them catch me”. Add a decent bit of sax and the easy going start is complete, but the Greg Allman song is probably one of the best covers in this collection.

All too often the exact same formula is applied to other covers – in some cases the transition from one song to the next is barely detectable. But amongst the 13 tracks are five UB40 originals – all penned by Travers – and this is where the record succeeds most. The first of these is Blue Bilet Doux: that trademark sax occupies a prominent place in the mix, with additional sweet sounding strings and a touch of pedal steel guitar provided by Melvin Duffy contributing to produce a song containing more emotion than is present on the majority of the covers.

At times an earlier sounding UB40 can be detected, notably on If You Ever Have Forever and another original – I Did What I Did; the former appears to be in a higher key than most tracks here and this pushes the normally indistinct voice of Duncan Campbell to more of a strain, invoking comparisons to his brother’s far more distinctive vocals. The latter includes a verse and chorus that provides more of an outstanding identity than its peers; a prominent steel guitar section leaves you in no doubt that this is country music but it actually ‘feels’ like an original track rather than an old song taken and re-recorded in a different style.

The single Blue Eyes Crying In The Rain opens to Würlitzer organ until the same formula returns, but a stronger brass section does provide a little deviation from the norm. The title track is one of the better covers on the album: with Duffy’s steel guitar not taking on an overbearing form it complements the reggae beat well to create an interesting mix and this is where the similar songs fare best, with just the right dollop of each style.

Despite so many setbacks it is to their credit that UB40 are still producing any music at all and their fans should be thankful for that. Most of the five originals here are decent efforts and lay out a strong case for a new album consisting of just original material in the future. The dabbling with country music overall, however, is rather hit and miss and the distinct lack of variation over several tracks won’t help sell this album in large quantities. There is enough here though to satisfy those die-hard fans – and it should also prove an interesting listen for those predominantly liking country but wishing for something just a little different.