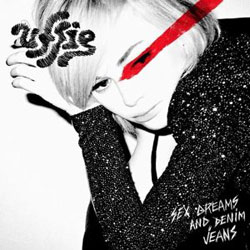 When Ke$ha‘s Tik Tok single exploded from nowhere last year it was clear that she was basing her image on Britney Spears‘ ‘lost’ year; her videos showed her stumbling about drunk, whilst in interviews she’d claim credit for all kinds of rebellious things such as defacing the Hollywood sign (since exposed as a record company prank). Musically, however, the talk of the blogs was that Ke$ha had ripped off the perpetually rising Uffie.

American-born and Paris-based, 22-year-old Uffie first emerged over five years ago, popping up on records by French synth-pop titans such as Mr Oizo, DJ Feadz and, most notably, Justice. Famed for her frank lyrics and odd delivery (she tends to rap-speak, usually through vocal effects), her early singles blazed quite a trail through the internet, culminating in the brilliant Ready To Uff (Tik Tok sounds suspiciously similar to it). Laziness, pregnancy and an 11-month marriage have all delayed the release of a debut album that’s now in danger of being written off as Ke$ha-esque, which would be a real shame; Sex Dreams And Denim Jeans is a genuinely thrilling listen.

Opener Pop The Glock sets the stall out, with Uffie’s heavily treated vocals riding a minimal beat of finger clicks and guns being cocked. Its positioning on the album almost serves as a test for the casual listener; if you can deal with the oddly flat vocals and continually self-referential lyrics, then you may continue, if not, you know what you can do. In fact, it’s this rebelliousness tinged with honesty that defines this debut. A number of songs feature Uffie talking about herself in the third person, or with a frankness that you don’t always get from American pop stars. MCs Can Kiss proudly states, “I’m an entertainer/ Not a lyricist” and “I’m the least working girl in show business” over a delirious old skool sample and funky bass courtesy of Mr Oizo.

Elsewhere, Madonna collaborator Mirwais provides the shimmering Illusion Of Love and the amazing Pharrell-assisted ADD SUV, which takes a swipe at blonde airheads driving around in gas-guzzling mini-tanks. For the most part, the album relies on a pandora’s box of electronic squiggles and huge synths, but the album also throws in a few curveballs. Our Song and First Love are relatively minimal electro-ballads, whilst the title track is like a modern take on 1970s rock, complete with screaming guitars. Another highlight is the sweary Ricky, which is built around a Neptunes-esque beat and a great vocal melody about how everyone’s been waiting for Uffie to arrive but she’s just been a bit lazy.

Sex Dreams And Denim Jeans is catchy, fresh-sounding and brilliantly self-referential, with an attitude a million miles removed from a major label star pretending to be like, totally, OMG, mental. It may have taken five years to arrive, but Uffie has delivered an oddly captivating future-pop masterpiece.