by Martyn Young
published: 28 May 2012 in Album Reviews
Tweet 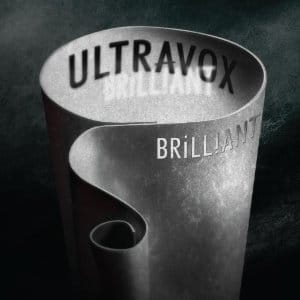 It takes some chutzpah to name your comeback album after a gap of 28 years Brilliant. Unfortunately, the new album from the revered electro pop group Ultravox markedly fails to live up to its title.

Led once again by Midge Ure, the line-up is the same as in their 1980s commercial heyday when they rose the crest of new romanticism and the UK’s fascination with all things electronic to become stadium filling kings of electro pop. Let’s not mention that thorny old business though of their über-melodramatic signature song Vienna being beaten to Number 1 by Joe Dolce‘s novelty hit Shaddap You Face.

Brilliant is an album that seeks to recapture the glory days of their commercial success and it’s an album steeped in nostalgia that sounds dated in the extreme. Set against the contemporary experimental work of former Ultravox leader John Foxx, the quartet’s new material sounds infinitely more functional and uninspiring.

The sound of Brilliant can loosely be described as stadium electro and there are copious amounts of booming drums, and spacey synth sounds aligned to lots of chugging guitars. Opener Live Again is a dead ringer for a track by The Killers with its ‘whoah’ vocals and big chorus. It is a fleeting moment of vibrancy. The exuberance of the opening track is probably the best moment on a record that is disappointingly short of memorable melodies or a real discernable spark. Ure, in that classic mannered voice of his, utters the lyric “If I could feel some kind of feeling” in the ponderous Flow, and that lyric encapsulates the main problem with a record that is mostly cold and disconnected.

Clichés and out-dated synthesiser sounds abound as the album progresses. A number of the tracks are annoyingly overwrought and overblown as the band strive for a big sound. The nadir comes in the mid section with a succession of excruciatingly dull and morose piano ballads that are full of portent but fail to make any sort of impression. The worst instance is This One which positively trudges to its conclusion.

There are mercifully lighter and more sonically interesting moments in the second half of the album. Let It Lie is a nice widescreen pop track with one of the albums few memorable chorus’ and Satellite offers a slightly new direction with a diverting eastern sounding string figure. A few more progressive moments like this would have been very welcome. Ure’s voice is hard to love, but it dominates throughout the album’s 53 minutes. It’s at its warmest and most engaging on final track Contact, a soulful ballad that at least ends the album on a positive note.

It seems easy now for heritage bands to jump on the increasingly crowded reunion bandwagon, so credit must be given to Ultravox for actually making some new music. Brilliant is an album that is very much for old fans though, and offers little in terms of new sounds or invention. Ultravox die-hards will no doubt receive the album rapturously, but Brilliant is very much an exercise in nostalgic reflection.