Ulver – The Assassination Of Julius Caesar 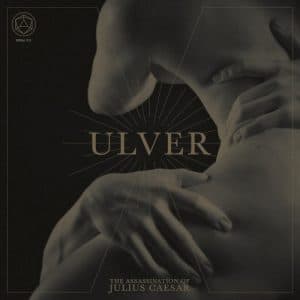 Wishful words from David St Hubbins just seconds before his band Spinal Tap launched into the poorly received Jazz Odyssey, a live improvisational piece at odds with the band’s previous output as a trouser-stuffing rock colossus. Changing styles is nothing new for bands, and interviews throughout the history of popular music are crammed with bands discussing the evolution of their sound or their need to change tack. This process is usually a slow shift in sound or style over the course of a series of albums; it’s fairly rare for a band to pull a Metal Machine Music out of the bag and confound absolutely everyone.

There are a few exceptions of course, and Norwegian outfit Ulver is one of them. A band that seems to think nothing of turning on a six-pence, they’re absolute masters when it comes to changing direction. Over the years, they’ve explored black metal, neo-folk, improvisional jams, drones, electronica, soundtrack composition and minimalism, and unlike Tap’s jazz explorations, Ulver’s capacity to mix things up has always been warmly received and appreciated. It helps of course that none of these experimental explorations were utter bobbins.

Up until now, Ulver has always been pushing at the edges of the experimental, but The Assassination Of Julius Caesar sees them taking what might just be their bravest step to date. Rather than another step into the avant garde world, this time around Kristoffer Rygg (aka Garm) and his cohorts, most notably producer Youth, have embraced the synth-pop sound of the ’80s. This is not an exercise in parody however, but an appropriation of a sound closely aligned to cold-war politics, pop-excess, and cold, robotic emotions.

That said, this is not an album that trades exclusively on nostaligia for a particular period, far from it. In fact Ulver’s sound is so polished, tight, and just peculiar enough to sound like an update on what came before (the skronking sax solo from Hawkwind’s Nik Turner at the close of Rolling Stone is perfectly bonkers). In addition, Garm’s lyrics utilise historical events, often aligning them to provide evidence of history repeating itself.

Take opening track Nemoralia for example. Taking its cues from Depeche Mode, Garm equates the life and death of Princess Diana with the Greek myth of the goddess Artemis. From there, the gloriously overblown pomp of So Falls The World is at pains to point out that “tragedies repeat themselves in perfect circles” as the band completes their transformation into Ulvervox. Southern Gothic states Garms intention to tell us something about “the grace of faded things”, and he does so by channelling post-Wham! George Michael (Jesus To A Child, not Fast Love, mind) and Wedding Album era Duran Duran. In the hands of someone less sure footed this could have been a potential disaster, but Ulver carry it off with considerable style and panache.

The influence of Le Bon et al carries over into Angelus Novus a song with a measured elegance that treats its historical references with such poignancy that any fading that might have occurred is quickly remedied. The assassination attempt on Pope John Paul II is covered on the somewhat danceable and borderline cheesey Transverberation and with that covered, Dean Stockwell turns up prods at Ziggy a bit, and Garm takes a leap from 1981 back to 1969.

Once back in one of the most significant years in recent history, Garm piles up his reference points. 1969 being the year the hippy dream ended, it’s significant that he mentions the residence that once housed Anton Le Vey’s Church Of Satan, but that only carries weight when mentioned alongside knowing winks to Rosemary’s Baby, the Rolling Stones and The Beatles. In the refrain of Helter Skelter, Ulver conjure up the presence of Charles Manson and reiterate just what a dark and disturbing year it was.

Closing with Coming Home, Garm takes his final Quantum Leap chanting “I have to make right, the things that went wrong” as he sums up his own life. After spending the entire album jumping through history and myth, assessing the tragedies that befall others, things suddenly seem to take a personal turn as he asks “what have I done?” over a backdrop of seething darkwave synth. The answer is – produce yet another album of utter genius in a stylistic vein that nobody in their right minds would have predicted from Ulver.