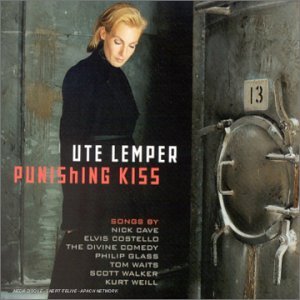 Nick Cave‘s opener Little Water Song is a hauntingly beautiful piece – the last thoughts of a girl as she is drowned by her lover – Joby Talbot‘s wonderful string arrangements serenely evoke her watery grave. Joby’s usual colleagues, The Divine Comedy, played a large part in this album as they performed most of the music and Joby co-wrote three of the songs with Neil Hannon.

Neil duets with Ute Lemper on two tracks including Tango Ballad which was included to mark the anniversaries of Kurt Weill‘s birth and death (100 and 50 years respectively) but it has been given a ‘modern feel’. I’m not sure if this is a good thing or not, the ‘tango’ aspect being rather diluted. It is also a peculiar subject – happy reminiscences of an abusive and exploitative relationship but it grows on you and Neil’s voice harmonises beautifully with Ute’s.

This is even more evident on the wonderfully theatrical lovers row Split (by Hannon and Talbot). Of their other tracks The Case Continues begins with a simple and very Irish sounding piano phrase then expands widthways – Riverdance anyone?! Very dramatic! You Were Meant For Me is fantastic, somewhere between a tango and a Bond movie theme it builds to a passionate crescendo of desperate, obsessive, unrequited love. You’d have to have a heart of stone not to feel moved.

Elvis Costello co-wrote three of the songs, including the title-track which is surreal, like smooth dark chocolate with an exploding sherbet fizz centre! Passionate Fight is a lovely dance through a doomed affair with a ’60s feel. It reminds me of Scandal by the Pet Shop Boys (with Dusty Springfield) or Cowboys and Angels by George Michael.

The two Tom Waits ballads are gentle, soulful and atmospheric, reminiscent of late afternoons and continental cafés, while Scott Walker‘s finale is less a song than a composition. Scope J is a musical journey through the limbo of semiconscious delirium. With disjointed snatches of lyrics, musical frenzy and serenity it veers between nightmarish paranoia and drifting calm, but somehow it all works and isn’t bad to listen to.

Ute’s wonderfully expressive voice combined with such a wealth of musical talent make this a very special album which draws you back time and again.