Vampire Weekend – Father Of The Bride

by John Murphy
published: 8 May 2019 in Album Reviews
Tweet 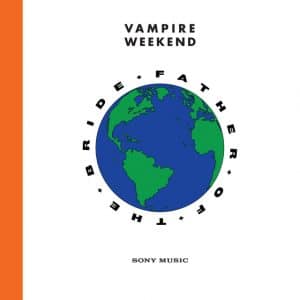 Six long years have passed since we last heard from Vampire Weekend, so much time that they almost seem emblematic of a different era. Father Of The Bride seems conscious of that – it almost feels like a reset button for the band. The album art is a world away from that gorgeous shot of a smog covered New York from Modern Vampires Of The City, being a child-like scrawl of a globe: and that’s not the only difference from the band’s previous records.

The band line-up has changed for one thing, with founder member Rostam Batmanglij leaving in 2016. Rostam’s presence is still felt throughout Father Of The Bride – he’s credited as co-producer of a couple of tracks and has co-written We Belong Together – and some of the album’s more experimental moments are reminiscent of his 2017 solo record Halflight. Yet despite the massive cast list of guest stars (Danielle Haim, The Internet‘s Steve Lacy, Childish Gambino producer Ludwig Gorannsson, and Mark Ronson), this fourth Vampire Weekend album feels like the closest thing yet to an Ezra Koenig solo record.

Where all of Vampire Weekend’s previous albums were short, snappy affairs, Father Of The Bride clocks in a massive 18 tracks and 58 minutes – and, as you’d expect from a record that length, the sprawling nature of the record gives Koenig plenty of room to experiment. There’s nothing to scare off casual fans, as the likes of Harmony Hall and the brilliantly breezy This Life (with its nagging refrain of “you’ve been cheating on, cheating on me, I’ve been cheating on, cheating on you” swiped from iLoveMakonnen‘s Tonight) already sounding like classic Koenig cuts.

There’s also plenty of room for what most people would cite as the band’s primary influence, Graceland-era Paul Simon, with the Afro-centric guitar riff on Rich Man being the most obvious example. Elsewhere though, Koenig delves into areas previously untapped by his band: the three duets with Danielle Haim have a country tinge to them, with opening track Hold Me Now (featuring an unexpected sample of Hans Zimmer‘s score for The Thin Red Line) being the most successful. There are also several references to Koenig’s changed personal circumstances – How Long talks of his new home Los Angeles “sinking to the bottom of the sea”, and the Fleetwood Mac-apeing Stranger directly references his partner Rashida Jones’ sister Kidada.

There certainly seems a lot to unpack in Father Of The Bride, and at times there almost seems too much crammed into the album. It certainly seems longer than its 58 minutes, and for every moment that works perfectly – the self-referential wink of Unbearably White or the frantic, exhilarating jam that is Sympathy – there’s rather too many half-formed sketches such as the autotune heavy Spring Snow or the piano ballad My Mistake.

Yet if you’re willing to invest the time, there’s plenty to enjoy in Father Of The Bride. Although they may have been away for six years, it’s the sound of a band re-centring themselves. While it lacks the zip and polish of their previous records, it’s a fascinating insight into Koenig’s songwriting process as it moves through a period of change.