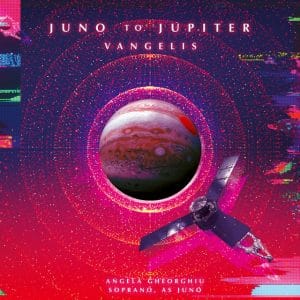 Nearly 50 years on from his Earth album, and 20 years since he provided a soundtrack for NASA’s mission to Mars in 2001, Vangelis is heading back to outer space.

This time his destination with NASA is further afield. Their explorations of Jupiter, launched in 2011 and now extended to 2025, have fired the Greek composer’s imagination, comparing the solar system’s biggest planet with the spacecraft sent to explore it. This is Juno, tasked with exploring the gas giant’s internal workings before moving on to explore its labyrinth of moons.

In Greek mythology, Juno (known as Hera) was able to use special powers to pierce the clouds which Jupiter (also known as Zeus) had drawn around himself, giving her insight into his innermost workings. In NASA’s mission the parallel is irresistible, the spacecraft using its own special powers to reveal some of Jupiter’s secrets. This provided all the material Vangelis needed to create this vast, symphonic score.

While composing a huge tableau as his soundtrack to the voyage, Vangelis has drawn sounds and voices from NASA, using the voices of mission managers and engineers, not to mention sounds from the spacecraft itself. For Juno’s voice, however, he calls on soprano Angela Gheorghiu. Her wordless vocalise dresses three of the score’s numbers, giving the craft an unmistakably feminine aura.

Her first appearance in Juno’s Tender Call is one of serene power rather than vulnerability – and it is in fact Juno’s Ethereal Breeze that more effectively captures the mismatch of size between spacecraft and vast planet, through fragile, synthesized voices. Hera / Juno Queen Of The Gods is one of the album’s most spectacular moments, Vangelis providing a starry backdrop to the soprano’s floated delivery. Finally Juno’s Accomplishments matches Gheorghiu with a rippling harp.

At times the scope of Vangelis’ music takes the breath clean away. From a tense introduction where the mission gets underway, thick ambience supporting recordings of voices from NASA during the launch, we move to the majestic Out In Space, a chance for the composer to show off the forces at his disposal. This pans out effectively into a vast emptiness, the eye scanning the distance beyond. Having set the scene, Juno’s Quiet Determination retreats to a more thoughtful mood to consider the mission ahead.

The album flows seamlessly as one symphonic poem, Vangelis moving between sections of contemplation and more intense, movement-based episodes. Juno’s Power is one of these, supporting its sweeping melody for strings with rolling drums.

It is interesting to compare his response to Jupiter with a composer such as Holst, who brought Jupiter into his suite The Planets as ‘the bringer of jollity’, conveying the ruler’s power through a large symphonic orchestra. Vangelis channels forces of a similar dimension, but now all of them are keyboard and sample fuelled. They do however secure music of impressive scope, grace and power. In The Magic Of Cosmos he channels the spirit of Rachmaninov and Tchaikovsky, opening out into an unashamedly romantic episode.

Zeus Almighty is the emotional apex of the album, a 10-minute sweep of consonant harmonies and bright light giving full due to the ruler’s / planet’s authority. At the same time it exposes a problematic aspect of the album, for Juno To Jupiter is one long listen. Like the mission itself it takes a while to pan out, and melodic inspiration can on occasion be substituted for mysterious sequences of harmonic movement.

At its best, however, Juno To Jupiter transfixes with its otherworldly music, giving a vivid account of the 365-million-mile journey Juno makes. It may take a while to complete its journey, but it stands as a very impressive achievement for a composer now nearly in his 80s. Like Jupiter, he is a bold, unstinting feature in electronic music’s night sky.