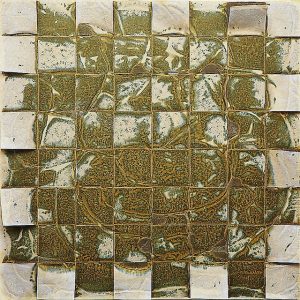 The fabulous furry Gibbons brothers are back with a new album, but it’s probably not the ones you’re thinking of. John and his sibling Michael hail not from Texas, but from somewhere north east, in the vicinity of Pennsylvania. When the brothers occasionally step away from their full time job creating psychedelic mayhem in cult band Bardo Pond, they like nothing more than to create yet more psychedelic mayhem under the name Vapour Theories. And, much like the chemtrails to which their name eludes, these five pieces of heavy psych that are held precariously in mid-air, evoke the poisonous tropospheric aftermath of a passing aeronautic titan.

The album cover, a swirling wall of caustic tiles in sludgy golds and greens, references the front of Manuel Gottsching’s E2-E4, if that entrancing krautrock declamation had been dragged through a bristly hedge backwards. And that’s a pretty fair summation of the sound embodied on the 13-minute opener Unoccupied Blues. Slow echoing bass resonances hover as a singularly pragmatic guitar peals out a blistering solo. Cut from thousands of hours of rehearsal tapes, it’s an intriguingly humble and absorbing early manifestation of their customarily fuzzy aesthetic. Forever at the threshold of exploding, it merely weathers itself contentedly with ephemeral abandon before eventually dissipating into thin air.

Sonorous acoustic scrapings mark the beginning of next track High Treason, drawn from a similar template, as warmly plucked strings hum and shifting ribbons of reversed magnetic tape feedback on themselves exposing the pair’s characteristic dependence on rich prophetic textures and devotion to the everlasting sway of the sustain pedal. The consequent experience is a continuum of the former track’s mood and measured pace, approaching a near tantric state as the Gibbons work in unison to provide a reconstituted layer of physiological folk flecked suppleness.

Favouring determined cohesion over unbridled bedlam, you approach the remainder of the album on an ascendant trajectory of aural nirvana. Subsequently the flurry of commotion that’s brought on during Breaking Down (The Portals Of Hell) makes the album feel denser and terser, the incessant buzzing countered by rhythmic spasms of free sound. Its atmospherics embrace an air of pernicious unease, devoid of compassion, after the intimate propositions of the preceding 20 minutes. Crumbling away, nearly inaudible beneath the tonally obscure molten shoegaze, lays an ambient sensibility that harkens back to the work of Brian Eno, an artist they are frequently driven to interpret.

Having previously tackled Here Come The Warm Jets and Music’s In Every Dream Home A Heartache whilst linking in the Bardo, for this release they grapple with the mythic possibilities of The Big Ship from Eno’s 1975 solo album Another Green World. Consistently used to underscore swelling emotional reprises in modern indie films, it’s a piece of music as inextricably linked with widescreen pathos as Max Richter’s On The Nature Of Daylight. Earnestly adding coatings of spontaneous disturbance to obliterate its recognisable sonic foundation, the brothers converge on it dynamically in opposition, collectively producing something invincibly loud that retains the original’s corporeal sense of the profound.

Finally there’s the texturally economic Soul Encounters to wrap things up, its minimalist frame articulately rupturing over the course of two minutes, scattering blurry incantations out into the sky. An animated combination of hoary rock and demonstrative ambiance, Celestial Scuzz delivers new directions in abstraction and should unconditionally spark the curiosity of anyone interested in deep listening.