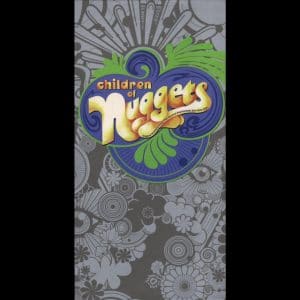 If you are already a fan of Rhino Records’ original classic ‘Nuggets’ garage-psychedelic compilation and its offspring, this four-disc, five-plus-hour box-set should easily exceed expectations. This latest instalment ably carries on the franchise with, as the Rhino website puts it, “a cornucopia of grassroots rock, retro revelations, and lush power pop from the next generation of like-minded bands.”

If you are new to the series, four-discs is a bit much to jump into blind. To explain, “Nuggets” refers to the goal of the series: to compile overlooked ‘treasures’. The sub-title of this set refers to a “Second Psychedelic Era”, which really only tells part of the story. What is represented here is a heavy psych influence in everything from psycho-billy (The Cramps), to power-pop (Chris Stamey and The dB’s)), to British Invasion throwbacks (The Nashville Ramblers), to frat-rock (The Untamed Youth), to greasy blues-rock (The Last), and even surf rock (The Barracudas).

Garage rock, the close cousin of psych, could have been tacked onto the title, as well: no frills, no pretensions and probably no formal music training to otherwise muck things up. Just some passionate and raw rock music, some jangly guitars, some organs, and some surprisingly talented bands. Children of Nuggets is the attitude of Louie, Louie and the trippy grooviness of The Strawberry Alarm Clock, all channeled through most every genre of rock there is. And, ultimately, these selections work very well together. After a while all one hundred songs even seem to run together, in a good way.

There are a more than a handful of bands here that you probably are already familiar with, such as XTC side project The Dukes of Stratosphere, The Plimsouls, Teenage Fanclub and The Wondermints. Yet, what this whole enterprise does so well is both remind, as well as document, that their have in fact been many great songs over the last thirty years that most of us have never heard, that may never have even hit the bottom of the Billboard 200, nor have ever even been the subject of a video! And Rhino apparently has vaults of this stuff. The only selection here that could be considered a well-known hit would be There She Goes, by The La’s, and even the familiarity of that song is excused by the fact that it happens to be one of the finest pop songs ever recorded.

There are a load of highlights, but just a few personal favourites are the Flamin’ Groovies’ I’ll Cry Alone, a bittersweet and melodic tune that marries psychedelic and folk influences; the New Wave sound of the Unguarded Moment, by The Church; the rollicking One Way Ticket, from The Nerves; and the shimmering power-pop of The Posies on Apology.

In short, I don’t see tiring of this box-set anytime soon. If you are already a big fan of the garage sound, than this purchase is really a no-brainer. Otherwise, tune into Little Steven’s (of E Street Band and Sopranos fame and who wrote a set of liner notes for the booklet accompanying this box-set) popular, garage-themed radio show a few times and, if you like what you hear, then Children of Nuggets will likely be an excellent investment in your musical future.