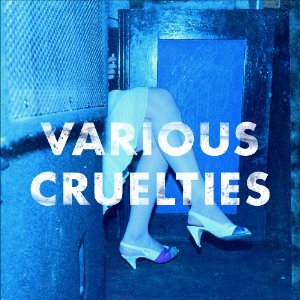 Various Cruelties is the stage moniker for Liam O’Donnell, a Scots-Irish Leeds native with a patchwork of musical influences who’s certainly done the rounds. At one stage, he might have been the next on the conveyor-belt of crooning, earnest minstrels to pop up on your radio; a slightly edgier version of Paolo Nutini or James Morrison, appealing to those who don’t like to think of themselves as too mainstream.

This was not Liam’s dream. He grew up hearing his dad’s Ian Dury and Elvis Costello albums; as a teenager he listened to The Strokes and The Stone Roses; he’s inspired by Richard Hell and the New York punk scene; and he’s a distant relative of Oscar Wilde (true fact). There was no way Liam O’Donnell was going to be just another crooner. So he ditched his name and adopted the ambiguous title of Various Cruelties, inspired by an exhibition by Ed Ruscha.

For those wondering, Ruscha has a piece of work made from red rayon crepe with the words VARIOUS CRUELTIES written on top in blueberry extract, made in 1974. You can probably come up with some deeply analytical theories as to why O’Donnell chose this name in particular; but it might partly be to do with how it sounds pretty good and will, undoubtedly, appeal to a certain audience almost immediately.

The music itself on the eponymous début album is aimed at this exact audience. To cover it with one umbrella, it’s a mix of straightforward indie guitar music, blended with a slightly smoother rock sound that uses clean electric guitars and keyboards, underlying the indie spikiness. There’s nothing groundbreaking to this, of course; the sound has been done before, occasionally wandering perilously close to something resembling The Kooks‘ early output, but overall it’s a solid, interesting sound. This is a well-executed album, and there’s enough variation on the same tone throughout to stave off boredom.

The album opens on the single Chemicals. It’s a perky, fun start, which cleverly draws you in to expect more. Summery and bright, with lots of ‘woah’s and snappy guitar riffs, it’s going to appeal to the kind of crowd who like Bombay Bicycle Club; Various Cruelties’ sound is less stripped back and more glossy, but his strained, almost gravelly voice gives it that same edginess.

The best track is probably Beautiful Delirium. A sweet four minutes of deep but dreamily trilling guitars and the gentle swooping of O’Donnell’s voice drags you through the waves of the chorus, leaving you feeling rather blissed out.

Other highlights include upcoming single Neon Truth, which is far closer to the jaunty troubadour tunes of Paolo and friends, and pleasingly reminiscent of Mystery Jets. Not that this is a bad thing, by any means; the retro, sunshine pop is enjoyable, showing exactly why the genre is a popular one. By the end of the song, there’s a lovely repetitive round of ‘I love you’s and similars, which are over far too quickly.

It’s almost a shame there aren’t just a few more songs like Neon Truth on the album; it’s occasionally a little mournful and maybe even try-hard, possibly too unwilling to be anything akin to the rest of the single-man-singing genre. When Various Cruelties gets just the right balance, the sound is beautiful to listen to, and would be perfect for soundtrack for summer.