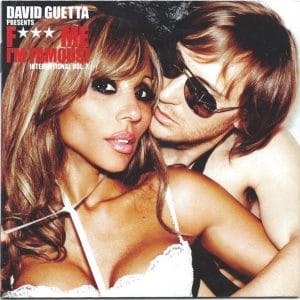 David Guetta‘s brand is a hugely successful one. The Parisian poster boy is one of the world’s best known DJs, filling clubs and boosting sales with his take on modern commercial house music.

All that of course is ripe for the Ministry of Sound, who while broadening their canvas with fine compilations such as Fred Deakin‘s Nu Balearica, are continuing to plough a commercial furrow with popular house music, served with a generous helping of cheese.

Guetta fits into this part of the equation perfectly, and tracks like Now The Love Is Gone confirm an aptitude for making people dance while throwing in decent lyrical couplets. Unfortunately any hope that might be repeated in the confines of a DJ mix is left well and truly barred from the club he’s playing in.

There’s no way around it – CD1 is a stinker, and reaches a nadir with a frankly hideous take on Daniel Bedingfield‘s If You’re Not The One, all the more surprising for its conception by Sharam. In this remix form the crossrhythms around the sample, lifted from the end of the chorus, sound less than inviting.

And though the mixing is perfectly fine it’s these kind of reworkings that blot the copybook throughout the set, for when tracks from Robbie Rivera and Felix Da Housecat threaten to rescue us from the creative doldrums, we’re straight back there with tunes like Sandy Vee‘s Bleep, complete with Led Zeppelin sample.

Happily the second mix fares much better, as Guetta injects a bit of trance into the musical flow, and the tracks sit together much better as a result. The central section is particularly good in its moody undercurrents, with Meck‘s update of the riff from the old OT Quartet classic Hold That Sucker Down working a treat, and kicking off a succession of quality trance from Tristan Garner, Steve Mac and Tom de Neef.

So it’s not all doom and gloom then, and CD2 boasts mixing as slick as Guetta’s hair. Just bear in mind the sampling crimes committed on the first mix when you measure it up.