by John Murphy
published: 1 May 2006 in Album Reviews
Tweet 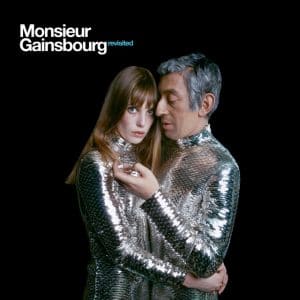 Songwriter, poet, film director, cultural icon. Serge Gainsbourg was all of these things to the French, so beloved that his funeral in 1991 brought Paris to a standstill and moved then President Mitterand to describe Gainsbourg as “elevating the song to the level of art”.

Yet it’s undeniable that, while he was enormously respected in his native country, an awful lot of people saw him as nothing other than a drunken old lech. Whether it be the infamous banned record Je T’Aime (Moi Non Plus), the somewhat questionable ode to incest recorded with his daughter Charlotte, or the notorious time he told a shocked Whitney Houston on live French TV “I want to fuck you”, controversy enveloped Gainsbourg throughout his life.

As with all great icons though, talent will out. Gainsbourg was a massive influence on a whole host of famous names, many of which have been gathered together by French rock magazine Les Inrockuptibles to record English language versions of some of his most well known songs.

The cast list reads like an A-List of Who’s Who in modern music – Franz Ferdinand, Jarvis Cocker, Michael Stipe, Cat Power – together with some names known better on the other side of the Channel, such as Jane Birkin and Carla Bruni. Yet just one thought persists through the smoke of famous names – why translate these songs into English?

Half of the point of Gainsbourg’s songs was the fact that they were sung in French – that Gallic mix of sexiness, sleaze and insouciance was perfectly suited to Gainsbourg’s dirty little tales. To translate them into English is either dumbing the songs down or bowing down to those artists who couldn’t get away with singing in a foreign language. Either way, it feels like a cop-out.

In common with most albums where all the tracks are cover versions, the quality varies widely. Gainsbourg’s most famous song, Je T’Aime (Moi Non Plus) – rather clumsily retitled I Love You (Me Either) here – is given a suitably breathy sapphic treatment by Cat Power and Jack White‘s wife Karen Elson. You can only imagine the dirty old devil himself looking down approvingly.

Jane Birkin, who provided the notorious moans on the original Je T’Aime adds backing vocals to Franz Ferdinand’s version of A Song For Sorry Angel, but it just comes off sounding like a Franz Ferdinand B-side. Portishead break their seemingly endless hibernation with Requiem For Anna, but it seems oddly inconsequential. Beth Gibbons sounds as other-worldly as ever, but if this is a taster of their long awaited third album, be prepared for disappointment.

There’s also two appearances by Placebo‘s Brian Molko, neither of which do him any particular favours, and Marc Almond singing a song entitled Boy Toy sounds about as camp as you may imagine, but without any sense of fun that Scissor Sisters, for example, would have brought to it. And the less said about Marianne Faithfull‘s reggae reworking of Lola R For Ever with Sly & Robbie the better.

It’s left to one of the less famous names here, Carla Bruni, to show us how a Gainsbourg song should be performed. Better known as a model with famous boyfriends – Mick Jagger, Donald Trump, Eric Clapton – she gives Those Little Things a gorgeously melancholy air which ends the album perfectly.

Like most tribute albums, Monsieur Gainsbourg Revisited is a rather hit and miss affair, but it may just persuade people to rediscover a man who was somewhat misunderstood throughout his life. If that’s the case, then this project can just about be judged a partial success.