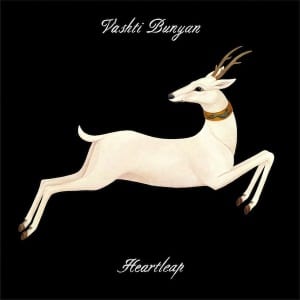 The Kate Bush fans who waited 35 years for their favourite artist to return to live performance might do well to consider the curious case of Vashti Bunyan, who effectively retired from music following her debut album (Just Another Diamond Day) in 1970. Yet the interconnectedness of the modern world can work magic, and this bucolic and pretty work assumed a new life, influencing a whole host of contemporary folk artists. Thirty-five years later, in 2005, came a follow-up of sorts, the delightful, idiosyncratic, wistful and charming Lookaftering.

Now working relatively swiftly, her third album Heartleap emerges a mere nine years on. Whereas Just Another Diamond Day assumed much of its character due to the production of Joe Boyd and the arrangements of Robert Kirby, and Max Richter lent a guiding hand the mood and sound of Lookaftering, Hearleap sees Bunyan assume complete control over a recording for the first time. Working in her own home studio, she has produced and edited the pieces as well as accompanying herself. If it is unlikely to have the pervasive influence of Just Another Diamond Day, Heartleap might be her most personal, intimate, and considered album. If her own pronouncements are to be taken at face value, it may also be her last.

Bunyan has always claimed she has never considered herself to be a ‘folk’ musician, preferring to be seen as a purveyor of acoustic pop. Even with her newfound cult status, she might be too quirky and unusual an artist to quite break in to the mainstream, but there are certainly moments on Hearleap where she seems more distant than ever from both tradition and convention. Mother, on which her vulnerable, intentionally thin vocal is accompanied by electric piano (apparently pieced together individual lines, rather than conventional two-handed playing) and strings, is a poised, beautiful miniature, vivid with memories. Jellyfish is even better, an intricate structure which belies the slightness of Bunyan’s delivery, her voice layered intricately, with melodic figures passing over and through each other, the generally shimmering and smooth sound given some light bite by the presence of a vibraphone.

Again, the lack of foundational bass or drums gives this music a light and airy quality that matches the brittle nature of Bunyan’s unassuming voice. Her gift for subtle and delicate but exquisitely crafted melody continues here unabated, not least on the eerie, haunting Shell or on the lightly descending lines of Gunpowder. The only downside of her vocal delivery, beautiful as it is, is that it can sometimes obscure the lyrics. These snapshots of home and family life do warrant being heard and understood. The closing title track is a neat list of words all using ‘heart-’ as a prefix, set to a swooning, beautiful melody.

Heartleap benefits from some subtle, unexpected instrumentation, including kalimba and vibraphone butalthough it does include contributions from her touring band (including the great guitarist Gareth Dickson), it still feels personal to the point of being solitary. It feels like a privilege to listen to it. It also feels like a patient and calm record – thoughtful, reflective but also keen to explore new areas. If it is to be her swansong, it is a fitting conclusion to a strange but ultimately valedictory career.