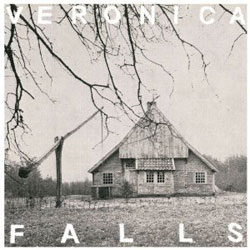 The casual observer might be surprised to discover this is Veronica Falls’ debut album. They’ve released a string of singles which have been well received and doing the rounds for some time now, earning the band a place at the top of the post-C86 table, alongside the likes of The Pains of Being Pure at Heart, Crystal Stilts and Vivian Girls.

Unlike their American anglophile counterparts, this band hail from the same island as the bands whose influence oozes from their every pore. They’re leading the way in the British indiepop scene, signed to Bella Union and nudging at the mainstream while their fellow genre-mates are resigned to playing East End pubs. Their sound is so very British and very nostalgic that, if you close your eyes, you can almost see the wash-faded Pastels t-shirt, the ’80s angular haircut and awkwardly cut cords.

But it’s not all jangly guitars, flowers and seven inch records; despite first impressions, Veronica Falls are dark. From the off, their subject matter is gloomy, even if the music isn’t, and debut single and album opener, Found Love in a Graveyard, sets the tone. “Dearly departed, I’m broken hearted,” moons singer Roxanne Clifford, channelling the girly brashness of Lush‘s Emma Anderson.

The gloom continues with Beachy Head, which weaves surf-guitars into a song about leaping from an infamous suicide spot. Wedding Day is wrapped in a different kind of glum, as Clifford snarls about a former loving marrying someone else (“Sorry I missed your wedding day, I didn’t know just what to say/ Except that you don’t look at her like you’re looking at me”).

With Misery they get straight to the point (“Misery has got a hold of me, Misery my old friend,”) but, lyrics aside, they even manage to make this track sound sugary sweet. Clifford’s dreamy, miles-away but one-dimensional, emotionless vocal wears thin after a while, but the rest of the band compensate with a shift in tempo elsewhere. Come On Over, for example, starts with a one minute intro which bursts into a furious, Wedding Present-esqe guitar, while early b-side Stephen takes a Pixies-ish bass line and loops it around a song that recalls Shop Assistants.

In keeping with their ’80s indiepop influences, the rest of the album has lo-fi hints of shoegaze and some ’60s inspired girl-boy harmonies, with All Eyes On You and The Box showcasing each respectively. Fans of the genre will find a lot to enjoy here; Veronica Falls have carved into a niche that will always have a small but loyal following which will baffle those on the outside. Newcomers would do well to do their homework first, and enjoy this debut with a thousand points of reference.