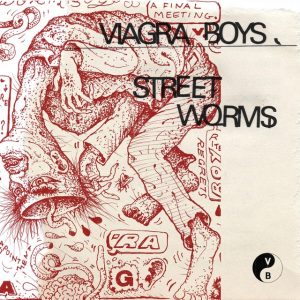 Sometimes, things just seem too good to be true. Stockholm band Viagra Boys are one of these things. Punks that look like punks, sound like punks and write songs about punk things.

They sound like The Stooges via The Fall, The Birthday Party via The Jesus Lizard, and they look exactly like you imagine they would: tattoos, drink-reddened faces and denim that only sees water once it’s been used in some kind of distilling process. So far, so punk. Even their name is pretty punk, right?

It also beggars belief that their music is so good. It really has no right to be – this sound should have died with Mark E Smith, or at least with Rowland S Howard. The thing is, however, that all of this would be a bit too on-the-nose if it weren’t delivered with tongues firmly planted in cheeks.

Their name is – thankfully – as ironic as some of their songs. Take for example the gloriously-titled Amphetanarchy, which sounds exactly like that. Album highlight Sports is about the joys of being a jock: all naked girls and various forms of suburban enjoyment from barbeques to “buying things off the internet”. Of course they’re taking the piss, folks.

However, there are times when the guard goes down and true feelings come to the fore. The bitter, vitriolic Just Like You is particularly biting: the lyrics spew out of the mouth of Sebastian Murphy (American dad, hence the name) with urgency and venom. You feel it when he says “I’m so glad/I never wandered down the wrong path/and ended up some kind of addict”.

By the time you get to the end of this hateful record, you kinda realise that it’s not too good to be true. These are pissed-off men playing with the tools of some of the pissed-offest men in recorded music history. But they do it with such intensity, and with such finesse, that you can’t help but get enthusiastic about them. Street Worms is a fine example of how to subvert expectations, and it’s a fine example of how to do ‘punk’ in 2018.