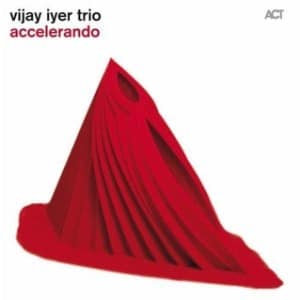 Pianist Vijay Iyer has been a pioneer, particularly in the field of rhythmic experimentation, in a remarkable range of contexts for much of the past 15 years. On that basis, it would be difficult to assert that Accelerando contains his most radical or adventurous music. What is fascinating about it is how it represents his transition to a bigger stage. Iyer is now an internationally renowned and extremely busy musician, and the music here seems to pulsate with the excitement of an artist who has achieved many of his life’s goals.

Although there is still plenty of Iyer’s trademark mathematical trickery here, Accelerando feels less scientific than some of his previous work. His trio with bassist Stephen Crump and drummer Marcus Gilmore is well-established now, and appears to have an impressive internal chemistry. Whilst Iyer has implacable academic credentials (a PhD thesis entitled ‘Microstructures of Feel, Matrostructures of Sound: Embodied Cognition in West African and African-American Musics’), he is also able to imbue his music with visceral thrill, urgency and immediacy. As its title suggests, Accelerando provides plenty of speed and also a very real adrenaline rush.

The brief, rumbling Bode strikes something of a warning note, but what follows turns out to be rich in joy, passion and enthusiasm. Optimism begins with subtle rays of home, which, after some improvising characterised by playfulness and strong melodic lines, eventually explode into something ecstatic. There’s a raw, almost punkish spirit to the piece’s concluding jubilant thrash, which showcase the trio’s masterful fusing of jazz approaches (asymmetrical meters) and rock dynamics.

Iyer shares with his contemporary Brad Mehldau a willingness to find common ground across a range of musical genres. In recent years, he has arguably done more than any other musician to open up the music to adventurous ears raised on a diet of sophisticated pop or electronica. Iyer first re-interpreted Michael Jackson’s Human Nature (a piece of course also tackled memorably by Miles Davis on his solo piano recording from last year. The trio version is even more spirited and imaginative, however, Iyer extemporises whole new layers of detail in this deceptively simple piece of music. The trio’s thrilling interplay helps it feel fresh and exhilarating even in this rhythmically complex new arrangement. It helps that Iyer’s music is more complex in its conception and approach than in its execution – his actual playing is clean, expressive and often moving. His technique is always subjugated to the broader, more important aspirations of great feel and strong emotional impact.

With an enthusiastic, enjoyable and atmospheric take on Flying Lotus’ MmmHmmm, Iyer even proves himself refreshingly current in his listening habits. Iyer hasn’t quite gone to the extent of absorbing FlyLo’s attention deficit approach to musical construction and contextualisation, but he has clearly been inspired by the skittering, stuttering quality of his rhythms (not only here but also on their warped, disorientating take on Heatwave’s The Star Of A Story and on Iyer’s restless, twitchy originals Little Pocket Size Demons and Actions Speak).

Any assessment of Accelerando would not be complete without either an examination of Iyer’s increasing mastery as a composer or a recognition of his vast knowledge of the jazz tradition. Whilst his judicious selections from the pop world provide him with fascinating and efficacious springboards for radical reinterpretation and improvisation, his own compositions provide arguably even stronger ground for his trio to work their magic. The insistent repetition of Little Pocket Size Demons allows room for Stephen Crump to play with unconventional abandon, exploring arco techniques where a more regular bassline might be expected. Lude somehow manages to be at once gentle and intense, allowing for some more reflective playing without any diminution in the trio’s energy levels. The title track plays with time and tempo in mind boggling ways. As ever, the group’s precision is startling. Iyer’s own presence and commitment remain constant throughout. After an hour of deep grooves and heavy intensity, the concluding take on Duke Ellington’s The Village Of The Virgins is refreshing in its spirituality, soul and beauty.