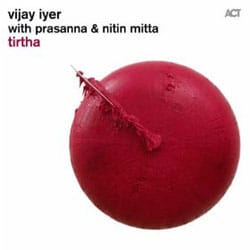 Pianist Vijay Iyer has already carved a considerable reputation for himself in contemporary jazz, fusing western concerns with harmonic and rhythmic material from the Indian musical tradition. Increasingly, he is proving himself adaptable to a variety of contexts. With the trio Fieldwork (with saxophonist Steve Lehman and the frighteningly skilled drummer Tyshawn Sorey) he ventures into freer, more abstract territory. With his own trio and quartet, he has explored the impact of metric cycles in jazz (earning a Grammy nomination for Historicity). He has collaborated with wordsmith Mike Ladd and last year, he released his first solo piano album that featured a number of surprising selections, including detours into the contemporary pop songbook and some familiar jazz standards thoroughly deconstructed. Tirtha (TEER-THA), his latest project, explores Indian musical concepts in even greater depth.

For this release, Iyer has collaborated with two other similarly virtuosic musicians. The gifted guitarist Prasanna has a wonderfully smooth, effortless sound, and uses slides and glides along the fretboard to replicate the effect of the sitar. Nitin Mitta is a superb tabla player, both expressively melodic and rhythmically accurate. The interaction between the three is consistently impressive – with Iyer playing sensitive support to Prasanna’s gracefully unfolding narratives.

Perhaps there is less potential for dynamic contrasts with this line-up than with a conventional jazz trio. What is most impressive about the playing here is the textural variety that the three musicians achieve. Abundance is a fine example – the music here is characterised as much by the amount of space the players leave as by the notes they play. Iyer has superb grasp of range – he always seems to be in the right geographical position on the keyboard to create an appropriate colour or tension.

There’s a sense of mystery to much of this material – Falsehood floats gracefully and, in spite of its title, seemingly open-endedly. Even the rapid, dexterous tabla solo from Mitta keeps the presiding mood. Unexpectedly, this suggests there may be common ground between Iyer’s brand of jazz and the European music familiar from the releases of the ECM label.

When the trio push rhythmic invention further into the foreground, they sound both determined and joyful. Gauntlet seems to have a perpetual well of energy, whilst Duality and Tribal Wisdom benefit from a breathtaking array of ideas and from the flexibility of the three musicians. Much of this music is based on cycles of adjacent asymmetrical time signatures, or from odd rhythmic groupings. To ears trained on western classical harmony, rock and roll, or even much of the jazz tradition, this will sound fearsomely complex. What is truly impressive about these three players is how confident and effortless they make it all sound.