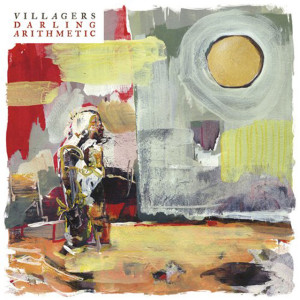 With a 100% record for Mercury Prize nominations following their first two albums, Becoming A Jackal and {Awayland}, third collection Darling Arithmetic is a shoo-in for more of the same – occasionally bombastic – winning formula of folk rock from Villagers, right? Not so. Main man Conor O’Brien has chosen a different approach, although perhaps not intentionally from the outset.

Villagers have always been O’Brien’s baby, but Darling Arithmetic goes the whole hog. With recording, mixing, production and virtually everything else including the playing of all instruments performed by just the man himself from the loft of his current residence, a shared farmhouse conversion just north of Dublin, the initial demos laid down by the singer have remained largely free from further tampering. Inevitably, this will prove to be divisive for the considerable following the Irish band have developed over several years since forming from the ashes of O’Brien’s former band The Immediate in 2008.

Lead single and strong opening track Courage epitomises the new stance, being a stripped back, sparse affair with a gentle sheen of percussion and a subtle backdrop of atmospheric electronica. There have been a couple of other teasers for the new album as well as the single – Hot Scary Summer and The Soul Serene; with the collection tagged by O’Brien as a “universal love album”, the singer delves into his own life experiences more so than before to put together the most personal output of his career, the former being a prime example of his new found openness.

A tale telling of homophobia surrounding his youth where he remembers “kissing on the cobblestones”, this superb cut is full of pent-up, powerful emotion, where acoustic guitar blends with Mellotron backing as he tackles his own sexuality and the issues it caused. The latter is another acoustic effort where he “tried to figure out what it all means” amongst “chameleon dreams in my mind”; like many of the tracks here, the beauty is in the subtleness of delivery, allowing the lyrics to breathe in easy surroundings of delicate atmospherics.

The piano plays a pivotal part in many a cut, such as the hauntingly beautiful, sparse acoustics of the title track. No One To Blame is another to benefit from the tinkling of the ivories, giving off a smoky nightclub feel for a sorrowful number where a strong vocal melody comes to the fore: “I’ve got no one to blame but myself,” he croons, with an unintentional double meaning appearing, as the effect of the change of direction will undoubtedly rest at the singer’s feet if the new course backfires commercially.

Perhaps the most memorable moment arrives early on: Everything I Am Is Yours is a stunner, its descending piano hook giving instant satisfaction in a collection that is sure to test listeners, but things aren’t always rosy in the album O’Brien has also described as being “entirely about love and relationships”. Little Bigot does get a little too close to the boredom O’Brien apologised for during the middle section of a Glastonbury performance before picking up after three minutes for a more rousing finale.

Darling Arithmetic even has its own ‘micro-site’ but the emphasis should be placed on the ‘micro’ here, as the content is considerably on the light side. The album itself reflects the minimalism of its site. But lyrically it is rich pickings for those that savour the words so often masked by either sheer noise or mumbled vocals, as O’Brien proves how he has developed into a rather impressive poet. Go elsewhere if your appreciation of Villagers cannot see past their more renowned guise but you’re missing out; with Radiohead and PJ Harvey tied at four Mercury Prize nominations apiece, it certainly wouldn’t be a surprise to see Villagers close the gap to just one come the next round of 12 in the autumn.