Villagers – The Art Of Pretending To Swim 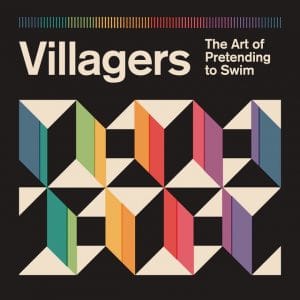 Like their fellow Irish artists Bell X1, Conor O’Brien’s Villagers have always been more of a big hit in their native country than across the Irish Sea. Their excellent debut Becoming A Jackal bagged a Mercury nomination, their live shows always attract a loyal army of fans and they’ve been critical darlings for nearly a decade, but they’ve never really made that big commercial breakthrough in the UK as yet.

The Art Of Pretending To Swim is unlikely to change that – not because it’s a bad album, but because it’s very much what O’Brien does. Those familiar with Villagers’ previous work won’t be surprised with their latest record: the subtle hooks, the clever mix of acoustic songwriting with a degree of electronic experimentation, it’s all here and it works really well, for the most part.

As with other Villagers’ records, The Art Of Pretending To Swim takes a few listens to really sink its claws in. First time around, it just seems like a pleasant ‘singer/songwriter’ type album: the type you’d probably file next to the likes of early Coldplay or David Gray. It’s only on repeated plays that the subtleties of O’Brien’s work really hit home.

O’Brien knows how to write a catchy chorus for sure – just try getting Trick Of The Light out of your brain after a couple of listens – but it’s the little tricks he adds to his songs that are arguably more interesting. The way that the finger picking guitar mixes with the twitchy beats and synths of Again, or the sense that everything’s starting to fall apart and disintegrate as Hold Me Down comes to its conclusion.

It’s those weird little experimental touches that make O’Brien such an interesting songwriter and, ironically, is probably why mainstream success has eluded him so far. He’s also good at exuding a deep sense of sadness through the record – a track like the gospel-tinged Love Came With All That It Brings may sound like a cosy little ballad to cuddle up with a loved one to, but lines like “she severed her heart with the blade” indicates something much darker.

Long Time Waiting is the album’s centrepiece and is certainly striking, filled with skittery drums, a hypnotic piano riff and plenty of bleepy synth sounds. Fool shows off O’Brien’s way with a memorable line, with lyrics like “the pen ran out ink, and the dopamine is dripping back into the kitchen sink”, while Real Go-Getter is another thrilling slice of experimentation, a self-motivational chant with a backdrop of squealing sythns.

O’Brien isn’t afraid to tackle heavy subjects (there are songs about self-doubt, faith and even a tribute to 19th century mathematician Ada Lovelace), but it’s all pushed through with a real lightness of touch that means that it’s easy to give The Art Of Pretending To Swim plenty of repeat listenings. It’s difficult to say whether this will be the record that finally pushes Villagers through to the big time, but in any event it seems as if being a well-kept secret rather suits them.