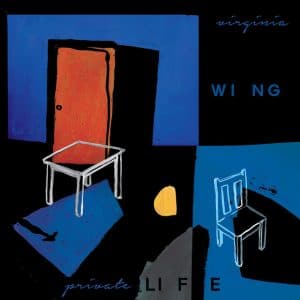 Virginia Wing’s Alice Merida Richards wants you to know that she is a patient and forgiving soul, willing to nurture others in exchange for reciprocal assistance herself. When she loudly states “I’m holding out” on the chorus to Out For Something, she’s referring to the way she will selflessly offer herself and her music as a means of support to someone who is maybe also holding out in the other sense, who’s resisting her charms and denying their own truths and oblivious to their potential.

The Mancunian synth band, gently whittled down to a duo of Richards and keyboard player Sam Pillay has, over time and with boundless certainty, removed all visible obstructions to their own personal inventiveness, transforming from formulaic purveyors of synthetic urban malady into philosophical mages constructing beguiling dance hybrids for enlightened souls.

The concept of being held captive to others or to building a prison of your own making is explored further on Half Mourning, in which Richards observes “Inside you’re still alive / but you’re stuck like a magnet / to the walls and the floors / of the rooms you inhabit,” and on Soft Fruit where she imagines life as some pseudo electronic personal assistant, locked in servitude, noting “I’m resigned to live in your palm / Longing to receive command” Employing the appliqued spatial grandeur and hushed exotics of the Cocteau Twins, the lyrics of Lucky Coin also speak of lives spent under someone else’s net, searching for ladders to ascend, and helping hands.

Seeking to address the weight of the checks and balances we place on ourselves, Private Life gleefully hopes to fill some of the void not taken up by our increased servitude to others, the songs contained softly pushing away in every direction, filling every surface with optimistic and benevolent reverberations. Much of the record has Richards adopting a vague robotic air, but by adding emphasis to select cadences, attuning you to every little variance in her accent to see where they will pinball next, she invokes the domestic comforts and poetic unease of Laurie Anderson rather than the impenetrable coldness of someone like Big Hard Excellent Fish’s Josie Jones.

Forever challenging fans to interrogate their situation, to go outside of their wheelhouses, as they broaden their own skills as songwriters and musicians, there are moments where they surrender to their limitations and allow faults to appear. 99 North has the band’s confident streak literally unspooling itself into disorder, and the funereal organ whirring of Private Life hints at the fate that awaits those who never strive for more than their lot in the scheme of things. Undaunted by the pressures they continue to face, Virginia Wing present a disarming form of resistance to life’s troubles.