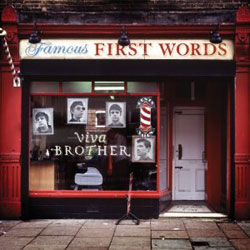 Let’s not delude ourselves – this band didn’t want to be called Viva Brother. They only tacked on the “Viva” because they had to, and because they were out celebrating the successful completion of a friend’s PhD when the decision had to be made*. They’re the people who started out being called Brother. Which is what you saw on Manchester City shirts when Oasis – a band founded on fraternal collusion and collision – were at their height. What possessed them to signpost their influences so clearly? On the evidence of their debut album, the answer might just be that to adopt any other pretence would be simply ridiculous.

Like grief, listening to this album comes in stages. The first is horror – that an album made so entirely of Britpop cliches should have been foisted upon the public. High Street Low Lives is a second-rate Country House; a poor man’s poor man’s Blur single. The guitar figure of Fly By Nights is full on Graham Coxon too, though that is preferable to the Dodgy odour that blights Still Here. Meanwhile, Lee Newell can’t let a “time” go by without Liaming a good two or three extra syllables into it.

The second stage is a growing sense of grudging respect, as the quality of the tunes starts to hit home. For all of its lyrical idiocy – “it is what it is” standing proud as one of the most pointless hooks ever to grace a pop song – Darling Buds Of May dives in and out of falsetto with swaggering charm, even if it rips off another pair of Blur songs in the process. Time Machine raises memories of Suede at their most commercial without descending into the pastiche that spoils so much of the album, and delivers a cracker of a chorus into the bargain. David may celebrate dumbness, but the tale of a man spurning the attention of paramedics to keep the party going will strike a chord with a V Festival crowd.

Then, as a natural consequence of stage two, there’s doubt. Could an album so steeped in the ’90s that your hair naturally gathers into a centre parting as you listen to it actually be – whisper it – good?

The answer is, as the final stage of acceptance and understanding seeps in, not really. Take away the few arresting melodies, and even if this was actually 1996 and this review was being written in the sixth form common room of a northern grammar school, it wouldn’t stand up against the Britpop elite. High Street Low Lives may be spirited, but no more than, say, Shed Seven‘s Getting Better, and the lyrical pay-off of “nobody is getting out alive” might just overtake Art Garfunkel tremulously cooing that he “held up and robbed a hard liquor store” in the top 10 unconvincing claims in pop music.

Perhaps that’s the point of Famous First Words. It’s never going to make any sense with your brain switched on, but pitched at anyone willing to put their synapses on standby, it might well be very clever indeed. But if you want to stretch your wings further, you need originality and you need not just bravado but actual courage – and Viva Brother’s world is neither brave nor new.