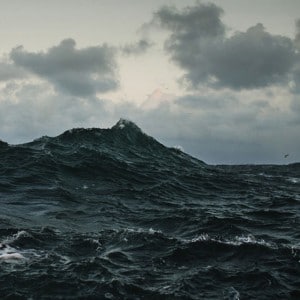 Three years in the making, Repave – Volcano Choir’s second long player – arrives some four years after the acclaimed debut, 2009’s Unmap. The collaborative that is Volcano Choir is for all intents and purposes somewhat of a ‘low-key’ supergroup, containing members of unsung bands including Collections Of Colonies Of Bees (originally), All Tiny Creatures, Group Of The Altos and Death Blues. They do however possess a jewel in the crown – Justin Vernon, he of the falsetto voice adorning the lush textures of Bon Iver.

Recorded at April Base Studios in Fall Creek, Wisconsin, Repave marks a departure from the debut in that it was recorded together as a proper band; Unmap was more of a carefully constructed jigsaw puzzle of musical fragments all recorded separately – at distance – by each collaborator before being ‘stitched together’ to create the whole. At times this showed, with the overall impression being more of soundscapes layered with vocals, forming something more like incidental music rather than full on, independent songs, a little reminiscent of Talk Talk during their more jazzy experimental stage.

Vernon himself has become one of the hottest properties around; not content with his work within Bon Iver, he is also a member of other bands including blues-rock outfit The Shouting Matches amongst others, also making key contributions to various other artists’ recent output, most notably Kanye West’s Yeezus.

Lead single Byegone gave a glimpse of what to expect from the upcoming album; filled with serene, minimalist instrumentation the piano led track always seemed to be on the verge of something, like standing on a precipice before a leap, that wouldn’t have sounded out of place on The Beach soundtrack. A clashing crescendo of cymbals finally paved the way to an anthemic chorus – and no sign of Vernon’s falsetto. This is, of course, evident on other tracks but the falsetto is used more sparingly than would normally be expected.

Tiderays, the album opener, introduces Repave with a Hammond organ to provide a funereal intro until beautifully plucked acoustic guitar accompanies a single hanging organ chord of some length to produce stunning atmospherics. Vernon’s familiar falsetto then joins with soft percussion, gradually building to a militaristic beat to create an impressive opening. The gentle acoustic pluckings continue for Acetate, alongside a simple repetitive bassline and minimalism until a more prominent, unconventional drumbeat takes the track forward. At times, the multi-layered vocals become a little chaotic but the sweet declining piano line helps divert attention away from the chaos and back to the delightful accompanying music.

Second single Comrade is one of the stronger tracks, opening again to gentle guitar and subsequent falsetto before a galloping chorus switches the track’s direction; the chorus is then given a unique touch on its second appearance with distorted vocal musings helping to create a thing of beauty. After Byegone, Alaskans provides more of the same with vocals this time reminding of Coldplay’s Chris Martin marrying with gentle string pluckings and piano to form music best served up on a hazy evening watching the sun set over a calm, glistening sea.

Beginning with more simple instrumentalism, tambourine and vocals, Dancepack ends up being a little disjointed, broken into distinctive segments with an uninspiring, repeated line of “take note there’s still a hole in your heart” failing to ignite the track. Keel provides a moment more akin to the debut album, with its structure not being that of a song with a clear identity, but more of a jazz-like musical ‘construction’.

Album closer Almanac takes the minimalist approach once again, with a pulsing synth sound, sparse guitar and crescendo of cymbals leading to more vocal noodlings. When the beat finally kicks in, a virtuoso vocal contribution emerges as the strongest ingredient to a track that varies greatly in structure and quality.

Sounding more like Bon Iver than Volcano Choir’s own debut, this offering will surely appease Vernon’s fans most; while it deviates rather sharply from Unmap, there are occasional moments that recall the band in its infancy but it is clear that the four years since the debut arrived have resulted in the band’s evolution – and they are all the better for it.