The Voluntary Butler Scheme – A Million Ways To Make Gold 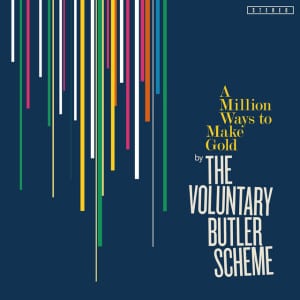 The album is a labour of love for Rob Jones, the one man of this one man band. Recorded in his own studio, it’s a real tour de force of extra mile going – instead of hiring in brass players, he took the simple yet dramatic step of learning the trumpet, tenor, and baritone saxophone all by himself, from YouTube tutorials. He affects a litle false modesty about the sound produced – “I wasn’t looking for slick, [but] warm, with imperfections” – but really, it will sound more than OK to even trained ears.

So, having spent all that time in front of the computer puckering his lips and attempting his Grade 3 arpeggios, it would be churlish to begrudge him plastering them all over every song. They are this album’s “thing” – just as synths were the album before – and for the most part, they work very well – underpinning the Super Furry Animals–go-Motown vibe of Believe, injecting a bluesy note into No Easy Way Out, or adding positively nifty fanfares and mini-freakouts to The Regulatory Reform.

What’s missing, though, despite the dense and varied instrumentation, is any real sense of depth. The album is sprinkled liberally with fine choruses, infectious hooks, and neat metaphors, but Jones’ tendency to dip his toes in the waters of pastiche gives too many tracks a sense of being written as an exercise rather than an outpouring. Looking For Nearby Water, in particular, is a skiffle-y number that could have been heard in wartime, were it not for the “don’t make you less of a man to be a mess of a man” lyric. It’s telling that the one cover here – an understated take on country ballad How I Got To Memphis – is also the most emotionally affecting moment.

It’s within these pastiches that the influences play out a little too obviously. The album keeps sounding a little bit like a certain artist, then a lot like them a few moments later, as if worried that you’d missed the reference. So The Q Word offers a funky repeated riff, not unlike Sufjan Stevens, before the brass comes in and it sounds like every track from Illinoise played at once. It also has a hint of Vampire Weekend – though you have to wait until the final track for that influence to explode in glorious, marimba-laden technicolour. Brainfreeze borrows a guitar line from I Want You Back, and So Tired is yet another re-write of Stand By Me.

The standout track is Honey In The Gravel Mixture – because, despite a distinct resemblance to The Divine Comedy‘s National Express and a fair few Belle and Sebastian numbers besides, the joyous trumpet introduction and dancefloor-friendly bassline sound so genuine and unaffected. It certainly isn’t the only good track here, and in a new, financially-challenged era of solo auteurs making records in flats with friends and desperately seeking adverts and TV shows to put them in, Rob Jones stands out as a true talent. But he’ll have to dig a little deeper if he wants his songs on our iPods as well as our TVs.

The Voluntary Butler Scheme on Spotify