by Jenni Cole
published: 21 May 2007 in Album Reviews
Tweet 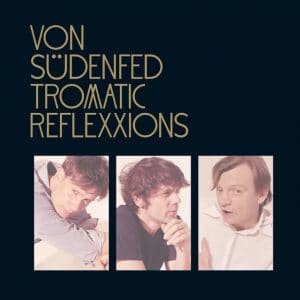 It must be fantastic being Domino Records and having the space, the scope and the vision to release albums like Von Südenfed‘s Tromatic Reflexxions, which teams Mark E Smith, distinctive-voiced über-prolific mainstay of The Fall, with electronic beatmeisters Jan St Werner and Andi Toma of Mouse On Mars.

Discoing up arch punk miserablist and Gollum-lookalike Smith is a completely bonkers idea. It should be enough to convince you that whoever first suggested it must have eaten a few too many disco smarties before coming to the meeting, but it does work, as those of you who remember the 2005 release Wipe That Sound, on which Smith first teamed up with the MoM lads, will remember.

Opening track and preceding single Feldermaus Can’t Get It sets the scene, with its steady and repetitive dance beats under Smith’s unmistakable vocal, and by second track The Rhinohead you really can see yourself heading to the centre of the clubland dancefloor, a territory you would never have suspected belonged in the same sentence as Mark E Smith.

Flooded, which retells the dream in which a rival DJ nicked St Werner’s slot and he flooded the club in revenge sounds like the bizarre lovechild of The Revolution Will Not Be Televised and a house anthem that’s had all its lights turned out and replaced with lava lamps. Speech Contamination/German Fear Of Osterreich stomps along with a bass line beat even Smith would die for.

The Young The Faceless and The Codes is not only a title that compels you to form a band so that you can nick it for your name but also has you wondering whether or not you’ve accidentally necked a disco smartie yourself without noticing it, and have imagined the whole thing, while the final two tracks – the dark, brooding electronica of Jbak Lois Lane and the jaunty, almost blues-folk of Dearest Friends – shows the full range of musical styles this unholy trinity is capable of producing.

In many ways, this is one of those collaborations that works precisely because all logic known to man says it shouldn’t. Like Arctic Monkeys swapping riffs with Girls Aloud, the more disparate the parts, the more likely the sum is to add up to something you’d never expect could be this good.

With 25 studio albums behind him, Smith doesn’t need to whore himself to 21st century Euro electronica, and Mouse On Mars are unlikely to bring many old punks into their field of influence just by utilising his vocals, so there’s no ulterior motives at play here. And anyway, with 15-odd years of their own career behind them, it’s only next to immortal old troubadours like Smith that Mouse on Mars could ever look like the new kids on the block. The fact that neither side needs the other is why Tromatic Reflexxions works so obscenely well.

Apparently, there’s a second album in the works already, as well as live festival performances to lookout for over the summer months. With grindie already dirtying the boundaries of our favourite genres, is the world ready for garage dance? Maybe not, but we’ll have fun spinning the decks in the meantime.