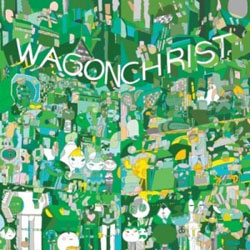 Eighteen years is long time. It was in 1993 that Bill Clinton waltzed into the White House as president, Doom was released for PC and Meatloaf‘s I’d Do Anything For Love (But I Won’t Do That) topped the UK end-of-year charts. Heck, we still had three years to wait to see Jerry Maguire.

It was also in 1993 that Luke Vibert whipped up his Wagon Christ alias; that needle-skipping, sample-dropping, beat-mixing persona etched onto his career’s finest highs.

While Vibert has worked under different pseudonyms – wheeling out acclaimed drum and bass as Plug, to name but one – the Wagon Christ project has been on more or less the same track for the best part of two decades. Toomorrow, surely, is the sound of a past master going through the motions. Or is it?

At the very least, it is an LP with its roots firmly in the last century; its opening pairing spill forth with generous portions of sampling over skewed, laid-back beats. One is instantly put in mind of The Avalanches, those Aussie breakbeaters who, like Vibert, cut their teeth with punk. Unlike Vibert, they also courted mainstream acclaim.

Not that such retro-styling is a bad thing: the album’s title track is an absorbingly menacing affair, Manalyse This! and lead track Ain’t He Heavy, He’s My Brother offer up careering glitch-hop and funky trip-hop respectively, and Accordian McShane treads an infecting line between bass groove and off-kilter droning.

Such efforts exhibit the qualities behind Vibert’s longevity, while others pluck at suspicions of genius-on-autopilot: My Lonely Scene seems a little unloved, taking an age to be revived with thudding compressions, while Respectrum tarries as a decent riff and fair idea repeated ad nauseum. (Does its closing shot – “Fuck off, you prick!” – indicate the Wagon Christ frustration?)

Nevertheless, those still attending at this stage are likely to continue to do so until the bitter end, and for such souls there are rewards (the frantic boom-bip of Wake Up) and frustrations (the aptly-entitled Wagon Christ-by-numbers of Oh, I’m Tired) in equal measure.

That said, Toomorrow’s strongest numbers come to pass in its later stages: Lazer Dick’s measured house is the sound of Vibert at his playful, erratic best – gleefully revising the crashing ’90s floorfiller – and Chunkothy ventures into placid, organic territory, steering the right side of ambient in the process.

In the end, though, it’s not quite enough deliver the album into the upper echelons. Tracks like Sentimental Hardcore – which trot along nicely on glitchy sequences and wandering riffs – pass muster without inspiring: it’s agreeable enough, but one can’t shake the suspicion that such efforts come very easily to a veteran like Vibert.

Not that you can blame him; while his sound is perhaps a little careworn after 18 years in the sun, there’s life in the old dog yet. Not enough to crash through barriers any more, but life nonetheless.