Those Who Walk Away – The Infected Mass 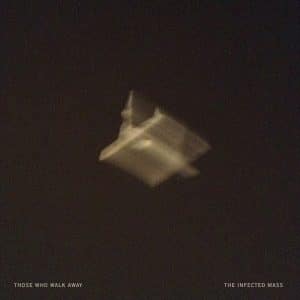 There are some recordings that lodge themselves in your brain and fundamentally change something about your very being. Sometimes it can be something as simple as the blossoming of first love at a school disco. Somewhere out there, there is someone for whom Chirpy Chirpy Cheep Cheep is the soundtrack to a key moment in their life. The poor swines.

Whilst music can provide the soundtrack to the sweeter things in life, it can also be fundamental in coping with the harder aspects too although it is possible to argue that Elton John’s attempt to soothe a nation in mourning with Candle In The Wind only served to make things worse.

Then there are records that are made that try and make sense of it all and ask the big questions and in doing so, they alter your perceptions. From Monument To Masses and William Basinski took on 9/11 and came up with some of the most charged and emotionally loaded music ever written, and almost everyone who has heard Sharpshooter or The Disintegration Loops will have been affected emotionally. The idea of death and loss has been covered on many songs and albums – Panda Bear’s Young Prayer, Eels’ Electroshock Blues, or A Silver Mt Zion’s He Has Left Us Alone are all perfect examples of musicians coping with absence and loss, and for some listeners these records will offer some support and offer a way forward.

The Infected Mass finds Matthew Patton (working under the moniker of Those Who Walk Away) attempting to make some kind of sense of the death of his brother who died in an air crash. It’s an intensely personal piece of work and at times it feels a little uncomfortable listening to what is essentially an elegy and a form of psychological processing. Not only is The Infected Mass an invitation into Patton’s grief and attempts to understand what occurred, but his use of aircraft distress recordings adds a further layer of voyeurism to the record. He freely admits that the use of these recordings is questionable, stating “there is something very genuine and at the same time very wrong in what I am doing. The recordings are very disturbing; as we listen to these cockpit voice recordings, real people are about to die. I don’t know why I am doing something that feels so wrong. But I am.”

Yet despite there being something of a moral ambiguity about the use of these recordings, his treatment of them is remarkably poignant and affecting. Each distress call is preceded by a “degraded” hymn. There are three in all, each using strings and drones to achieve something achingly beautiful. Patton also subtly utilises the sounds of blood circulation, breathing patterns and other ambient sound. Sometimes the instrumentation and ambience is barely there at all; not for nothing are the players on the album referred to as “ghosts”. The distress calls themselves are a strange affair in that everyone will bring their own personal baggage to them. It’s unfair to suggest why Patton felt compelled to use them, but to these ears, they’re strangely comforting.

The matter of fact speech of the control towers and pilots in the face of chaos and fast approaching death is surprising and admirable, it barely seems real. The clatter of shoes on hard floors in echoing rooms is a strange touch, but it is these strange details that often stick in the mind after a traumatic experience. The smell and sounds of a hospital waiting room for example are sometimes the strongest memories of a trip to A&E, and it is the use of these small details that makes The Infected Mass such an effective work. Patton’s inclusion of a rushing sound to indicate the point of impact seems somewhat superfluous to the narrative of the recordings, it’s perhaps the only time he overcooks it.

More often it is in the absence of sound that the album works best. The silence that follows the final transmission on Second Partially Recollected Conversation is utterly chilling as you’re left to fill in the blanks. Did they make the landing on any runway? Did they all perish? It’s possible that it is these blanks that this album is designed to fill somehow, albeit with hymns for those lost.

There’s no doubting that this album is a conceptually heavy album but despite this, there’s a deftness of touch and an elegance to it that is utterly beguiling. The use of human sounds such as the flow of blood means that there’s life all over this album, even in the moments when death comes rushing in and that is somehow reassuring. Ultimately, what you bring to this album is going to affect what you get out of it and when you walk away from it, you will feel different. For those who have experienced the trauma of loss, this is a sermon that offers considerable solace.

Those Who Walk Away MP3s or CDs

Those Who Walk Away on Spotify