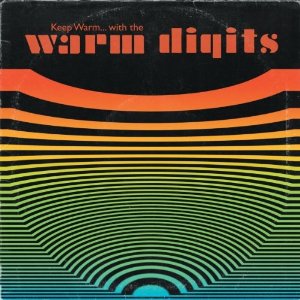 Instrumental albums live and die by their ability to pique and maintain interest with rhythms and textures, without relying on lyrics to mask any shortcomings. Warm Digits also show that music sans vocals doesn’t need to compensate by shoehorning a who’s who list of influences at every juncture.

Andrew Hodson and Steve Jefferis are among a throng of artists blending electronica with experimental, post rock elements; balancing beats with loops and melody and choosing their epic and sensitive moments carefully. Touting themselves rather aptly as a ‘21st century krautrock hybrid’, they’ve remixed tracks for UNKLE and Maxïmo Park. Debut LP, Keep Warm… with the Warm Digits, boasts Field Music’s David Brewis on bass.

Hailing originally from Newcastle and the North East, their roots are laid bare, both in the landscape-mimicking textures and the straightforward approach to music making. And although the pair started life as a laptop techno outfit, they’ve travelled some distance from their beginning. Instead, electronica is now used as a metronome and a tool for developing rich, warm notes and textures that mix nicely with the new, heavier, instrumental side of their sound.

The concept of ‘warmth’ crops up a lot with the Warm Digits, lessening the harsh effects of Mother Nature’s drizzle-infested shock tactics on northern landscapes. Much of the album nestles itself in synths and comforting beats – Keep Warm’s trills and piano notes build to a crescendo with bursting drums. It’s no surprise that Warm Digits’ ’70s experimental tendencies have wooed comparisons with Neu! – the band born from early Kraftwerk members – carrying strains of similar loops and exploratory, psychedelic riffs.

Trans-Pennine Express chugs into gear with huffs and puffs, rattling over sleepers. It duly nods to Kraftwerk’s Trans Europe Express, both in name and with movement-influenced rhythms and journeying melodies. But despite its label, the track’s drums and percussion are in fact the sonic kin of Holy Fuck, with Milkshake-esque punching drums that turn new pages on the track. That irrepressible pace continues with Weapons Destruction, balancing powerful rhythms in the first half with a looped, woody-noted melody, flipping to give the laptop its limelight at the close.

Distortion and dischord regularly make appearances in the debut, harmonising with interwoven layers. But the undulating guitars and cascading drums mean Warm Digits never stray a million miles from post rock, like Mogwai, only touched by laptop beats, mixing desks and dancefloors. It’s this constant, but well-placed tension between computer and the manmade that makes Keep Warm work as a complete entity, One Track Groove capturing that same mix of guitar and synth.

But there’s room for change in pace with Grapefruit and The Surplus Of Seeing – both slow grinding, melodic offerings with helpings of cowbell and sci-fi synths. Sweeping kraut electronica weaves itself through this and much of the rest of the album, but with a cosy timbre, as on A Warm Front Coming From The North, which feels like an ’80s arcade game version of what the future was supposed to be like.

Keep Warm… with the Warm Digits is not an extravagant effort, but it works as a cohesive whole and is an ideal starting point for the duo, showing a great deal of intelligence in their craft. Some of the edges might be a little rough, but the album’s epic rolling drums mixed with the warm textures and beats, means that the interplay of the organic and computer-generated is the star.