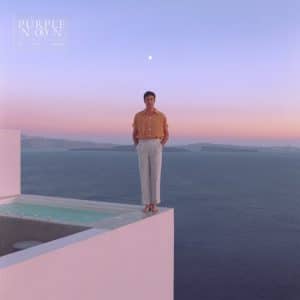 Talk about good timing. Ernest Greene’s latest chapter as Washed Out arrives in the UK along with the hottest weather of the year to date, meaning its music, drawing from the Balearic history and climate, is perfectly aligned with the summer sunshine.

As well as its Mediterranean outlook, Purple Noon takes its title from the 1960 film, itself based on Patricia Highsmith’s Italy-centric book The Talented Mr Ripley. But unlike the principal character, Washed Out has never had the need to keep his true identity hidden, staying true to slow, beat-driven music.

The principal qualities are all present and correct this time around. They include the ability to set controls to ‘chilled’ at the flick of a switch, the use of luxurious textures and orchestration, and a polish that would charm the most expensive hi-fi system. Think Air, Hugh Padgham-produced Phil Collins or Sade and you have an idea of the beautiful backdrops in store.

Paralysed, in fact, is pure Sade. Its tales of devotion unfold over a hot weather beat and rich keyboards, but while Greene sings with hushed tones, the song has a borderline obsessive tone.

This theme runs for much of Purple Noon. Despite their sun-kissed demeanour, many of the tales are laced with melancholy, unfolding as a break-up album. Face Up confronts the painful junction approaching the end of a relationship. “Are we gonna make up? Are you gonna act like we’re fine?” he asks. “You don’t have to lie, we just need to say goodbye.” The following song, Time To Walk Away, appears settled with that outcome, striking forward more purposefully with an easy, loping beat that has a slight spring in its step. Don’t Go is not so sure though, its starry backing masking a heavy anguish which comes out in the leaden beats as they drag their feet.

These are the tensions in play that raise the music of Washed Out above the average poolside fodder. Greene’s soft, multi-tracked vocals remain his calling card, but the subtleties of the backing work nicely. The final song Haunt proves to be the trump card, a noticeably more powerful vocal signing off on a troubled lyrical note if not a musical one.

Musically it turns out to be blissful business as usual for Ernest Greene on his fourth album under the Washed Out moniker. The bittersweet sentiments remain but they are beautifully expressed and wrapped up in classy production, with a notable tension that hangs on every song. Taking these elements into account, there is no need for the current, winning formula to be changed.

Washed Out MP3s or CDs

Washed Out on Spotify