The Wave Pictures – Bamboo Diner In The Rain 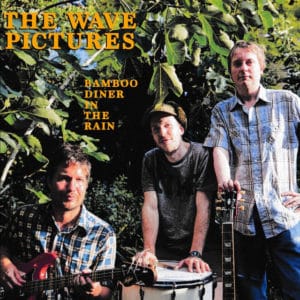 In retrospect, if February’s A Season In Hull seemed anything less than successful, it might have been because it failed to capture something fundamental about The Wave Pictures‘ sound. The songs may have been recorded around a single microphone, but even this approach lacked the immediacy of the band’s live performances – witty, vital and electrifying – frequently captured so well throughout the trio’s increasingly large catalogue. Happily, from the off-kilter minor-key blues of Panama Hat, all fuzzy bass and lines about making “friends with my black and white cat, I never saw him take to someone new like that”, to the tense, thunderous Crazy Horse-isms of The Running Man, Bamboo Diner In The Rain plays to all the band’s strengths, making for their most satisfying album since 2012’s Long Black Cars.

While there’s still more than a hint in their sound of the wiry melodicism of the Go-Betweens and the playfully naïf rock’n’roll of Jonathan Richman – despite frontman Dave Tattersall’s description of “an indie rock band with absolutely no indie rock influences” – they’ve frequently veered closer to rootsy Americana than the small-town romanticism and pithy observations of their lyrics might suggest. And Bamboo Diner… heads perhaps more heavily in this direction than ever before, with the opener’s bluesy feel carrying through to the typically pithy, lurching Now I Want To Hoover My Brain Clean (“You never let me in on the conversation you were having with yourself/You never know, I might have helped”) and the ceaseless, snapping John Lee Hooker-ish patterns driving Newcastle Rain and H.D. Rider.  Even the cover seems to nod towards the portentous bayou blues of Creedence Clearwater Revival‘s Green River, a pair of songs from which featured on Great Big Flamingo Burning Moon.

A couple of instrumentals – Bamboo Diner Rag, with shades of the American Primitive Guitar of John Fahey, and the wistful Meeting Simon At The Airport – break the flow a little, with bassist Franic Rozycki’s mandolin adding colour to Tattersall’s finger-picked acoustics. As ever, Tattersall’s on scorching form throughout Bamboo Diner…, the rumbling, droning leads peppering Panama Hat and the raw, freewheeling solo from Newcastle Rain being particular highlights. But the songs never stray into self-indulgent territories, and there’s a jagged precision to the lyrics, whether it’s H.D. Rider’s road-weary punning – “I was down before the show/I’ll be down after the show/It’s a showdown” – or the desperately tender Hot Little Hand (“and I hold on tight”, quivers Tattersall, underpinned by tremulous organ in the Garth Hudson or Alan Price mould). The post-gentrification blues of Pool Hall, too, ought to strike a chord when the band play it live. “Have you heard?”, Tattersall sings, then joined by the others – whose rather deadpan backing vocals are a familiar trope – in adding: “They’re closing down the pool hall/Have you heard?/They’re turning it into flats!”. You get the impression, though, that ‘they’ could dismantle the very venue from around the Wave Pictures, but the band would just play on.

Fifteen or so albums in, Bamboo Diner In The Rain is not much more, but crucially nothing less, than another reliably solid album from one of our most consistent acts. A resounding success, then.