The Wave Pictures – A Season In Hull 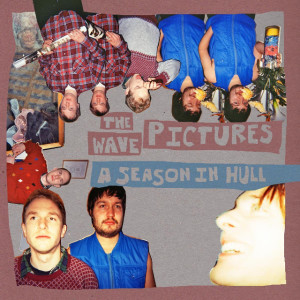 Having released something like fourteen studio albums since 2003, while touring almost constantly, The Wave Pictures could hardly be accused of taking it easy. But, after last year’s raucous, Billy Childish-enhanced Great Big Flamingo Burning Moon and 2013’s ragged double City Forgiveness, A Season In Hull definitely takes a simpler approach.

At friend and collaborator Darren Hayman’s suggestion, it was recorded in one day at London’s Soup Studios, with the band playing live around a single microphone.  It’s an approach dating back to the dawn of bluegrass, exploiting the natural acoustics of a room, and it suits the band, with their Americana-via-Leicestershire sound and off-the-cuff, DIY spirit. “You get the picture right once and you capture it,” frontman and guitarist David Tattersall has said.

Discounting one throwaway poem, the instrumentation is simple throughout – mostly acoustic guitar, Franic Rozycki’s melodic, strolling bass and Jonny Helm’s sparse percussion – but the styles vary, taking in country, folk and the slow, creeping blues of the title track or Memphis Slim in Paris, the ease with which the band switch in no small part due to Tattersall’s always superb playing. Something of a well-kept secret, it seems no-one told The Wave Pictures that indie-pop bands should be shambling and inept, and he’s no less nimble on the heavier strings of an acoustic. The droning open strings and frenetic single-note bursts of the opener stand out particularly, along with the neat fingerstyle parts underpinning David In A Field Of Pumpkins or the Jonathan Richman-referencing The Coaster In Santa Cruz.

There’s a knowingly harmonised lead line, too, on Thin Lizzy Live & Dangerous, surely the best song of its genre to reference Phil Lynott & co. since Belle and Sebastian’s I’m A Cuckoo. It’s sweet and reflective, with solitary, downcast verses (“the slug-like movement of summer nights’ shadows”) brightened by the choruses’ romantic liaisons, the titular album “blasting on the stereo”.

Slick Black River From The Rain is another highlight, a percussive minor-key shuffle full of overflowing ashtrays and “thick coffee circles on the virginal white inner sleeve of the vinyl”. Tattersall has often demonstrated a way with a deadpan, witty line, shifting from the everyday to the bizarre, but the lyrics are perhaps the one weakness with the approach here. Written as quickly as the songs were recorded, they’re occasionally a little hurried, almost an afterthought: Tropical Fish, for instance, scatters its nonsense imagery around a little too loosely and has a bridge consisting of the same line (“Somewhere in the distance children are singing”) forwards then backwards.

Despite feeling a little flimsy overall, the breezy, singalong A Letter From Hull (Dom’s Song) is a window into the sessions which suggests the album was a lot of fun to record, and the final trio – The Pharmacy Cross, Hot Rain Riding On The Salt Lake and David In A Field Of Pumpkins – are strong. The first is a mournful acoustic number and the second a minor-key metaphorical murder ballad – with Tattersall variously wrapped in a sheet, thrown from a balcony and hung “upside down on a meat hook, the way a dream hangs behind the eye”- while the last wraps a descending and resolving bass line around a warm, endearing lyric.

The album sounds like what it is, then: a spur-of-the-moment, vinyl-only release, written and recorded for simplicity and speed. On these terms, it succeeds. The Wave Pictures haven’t made a bad album yet, and they don’t start here; newcomers, though, should perhaps seek out Long Black Cars or Beer In The Breakers. Meanwhile, the band have their next album recorded and are halfway through another; those looking for a little more than A Season In Hull may find something worth holding on for.