Wavves – King Of The Beach 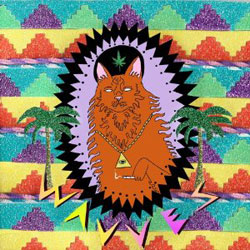 The best means of leaving critics dumbfounded is through an act of sheer excellence, one that arrives completely out of the blue. Wavves (Nathan Williams) has repeated the act of Napoleon Dynamite‘s’ Jamiroquai dance, David Beckham’s career revival following a 1998 World Cup sending off; he’s risen from the dead, making an album that very few deemed him capable of.

And of course, it’s full of all the angsty fight-backs that you’d expect from a man on the receiving end of the music press’ most bitchy period. WIlliams was left slammed by those that hailed his rising, following a rock star bar brawl, a drug-ridden ‘meltdown’ at a Spanish festival, preceded by a mediocre second album.

King Of The Beach’s hard-hitting production (a stark contrast to the gritty, lo-fi sound of Wavves’ previous record) replicates the down-in-the-gutter, “Fuck you” attitude of Williams following the most difficult year of his career. The songs are full-on, hard as nails, amplifiers turned up to full.

It’s not merely anger and frustration circuiting the works of this album, Williams regularly seems to be poking fun at a shallow blogosphere that can turn its head at any time. When he declares “My own friends hate me”, you suspect the term “friends” could easily represent those that proclaimed the youngster in his early days, only to drop him from a great height.

Grunge music hasn’t sounded so real for a very long time. Idiot begins with a hysterical laugh leaving Wavves to snarl: “Laugh, I bet you laugh, bet you laugh right behind my back”, upholstered by thick, commanding guitars and thrashing drums. It’s emotive, and it sets the tone of animosity for the rest of the album.

Green Eyes initiates itself up as a tame ballad in the first 30 seconds, before Williams and co. steer it elsewhere, into yet another frenzied rock piece, contrasting dramatically to the romantic opening line: “Green eyes, I’d run away with you…” Post Acid and introductory track King Of The Beach stick to a similar path – obnoxious but flawless pop-rock that although grating at times, manages to get the adrenaline flowing.

But King Of The Beach isn’t a predictable, one-dimensional affair. When Will You Come is a gentle, spaced out rendition that follows the album’s opening three songs, each of which displayed nothing but solid rock. There’s sleigh bells, hand claps and a reverb-soaked drum beat resembling The Jesus And Mary Chain‘s Just Like Honey. It’s a simple touch of versatility like this that makes this album feel like quite an accomplishment; a well-constructed, whole piece.

To his frustration, many will still dismiss Williams as a media-seeking player; the first celebrity of the lo-fi music scene; more a hate figure than a musician. But if the career plan was to go to the lowest of lows before releasing an album of resurrection and real substance, he ought to be applauded for conducting the whole stunt to perfection.