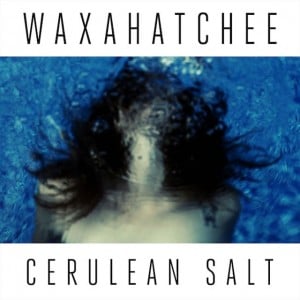 Twenty years ago, the American singer Liz Phair released her debut album Exile In Guysville. Billed as a “track by track response to Exile On Main Street”, it was an astonishing record, full of scratchy, raw songs about dysfunctional relationships, enlivened by some sexually frank lyrics. To hear a woman singing “every time I see your face I get all wet between my legs” was quite the eyebrow-raiser in 1993.

Sadly, Phair’s career succumbed to the law of diminishing returns after Guysville, so much so that her last official release was in 2005 and she now works scoring music for TV shows. Yet, spiritually at least, we’ve now got what sounds like a genuine follow-up to Exile In Guysville – albeit one that’s entirely the work of a 24 year old from Philadelphia called Katie Crutchfield, aka Waxahatchee.

Cerulean Salt is Crutchfield’s second album, and is a record full of sharp, short, fuzzy little pop songs that could easily have come from that time in the early to mid ’90s when you couldn’t move for women gripping a guitar – as well as Phair, Cerulean Salt recalls names such as Kristin Hersh, Tanya Donelly and Veruca Salt. Kyle Gilbride’s lo-fi yet crisp production highlights Crutchfield’s sad, expressive vocals while mostly, with a couple of notable exceptions, a mournfully strummed guitar is her only accompaniment.

Hollow Bedroom lays down this template right from the start, a slowly building guitar underpinning Crutchfield’s starkly confessional lyrics: “I don’t believe I care at all, what they hear through these walls”. At a little under two minutes long, it’s over almost as soon as its begun, and that economical attitude is adhered to throughout the album – in fact, there’s not a track on the record which clocks in at less than four minutes.

Although Waxahatchee never slips into the maudlin, pretty much every song drips in sadness and regret – firstly, there’s Crutchfield’s voice, which could probably bring out a wistful quality to REM‘s Shiny Happy People, but mostly it’s down to her lyrics. It takes a few listens for the devastating impact of Crutchfield’s songs to really sink in, but when they do it’s like a punch to a gut.

There’s the pay-off of Swan Dive, for example, where she admits to “having dreams of loveless marriage and regret”, or the self-loathing of the closing You’re Damaging (“this place is vile and I am vile”). Even the portrait of a friend’s marriage has a beautifully evocative line about the “make-up (that) sits on your face like tar”, which somehow gives the impression that this is a marriage that’s doomed to fail before it’s even begun.

Yet, Cerulean Salt isn’t an album to mope to – in fact, on tracks like the gloriously upbeat Coast To Coast, the exhilarating rush of EMA or the better moments of Bethany Cosentino’s Best Coast is brought to mind. Instead, Waxahatchee’s second album is one to immerse yourself in, to lose yourself in and generally marvel at the raw emotion that’s so beautifully expressed. A record that you’ll find yourself coming back to time and time again.