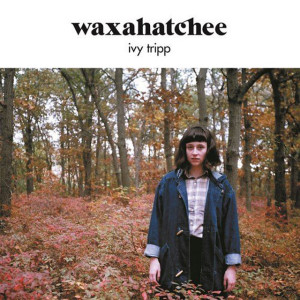 Around the time of the release of her breakthrough album Cerulean Salt, a broadsheet newspaper described Katie Crutchfield – the Philadelphian singer-songwriter who releases music under the name of Waxahatchee – as “Lena Dunham with a guitar”. The tag stemmed from a comparison between Crutchfield’s then-itinerant lifestyle and the similarly skittish behaviour of Dunham’s character in Girls but, in turn, suggested that Waxahatchee’s music was likely to be as self-absorbed, funny and sexually forthright as Dunham’s televisual creations.

As it happened, Cerulean Salt was none of those things. It was a serious, considered and at times melancholic work. Although the album was confessional in tone, Crutchfield favoured metaphor over specificity – there were certainly none of the gobsmacking, did-she-just-say-that? moments of, say, Liz Phair’s early work (to cite another artist to whom Waxahatchee is frequently compared).

Two years on from Cerulean Salt comes Ivy Tripp. Crutchfield recently spoke about experiencing depression during its making, and this, surely, contributed to the predominately downbeat nature of the album. This is an often-slow, occasionally stately record on which five of the eleven songs don’t feature any drums.

That’s not to say that Ivy Tripp is a complete downer. Lovers of ’90s indie rock are likely to have their pleasure buzzers pressed by Under A Rock, Poison and Air, all of which combined saw-toothed guitars with honeyed harmonies in a manner similar to The Lemonheads and Teenage Fanclub. Less Than includes a wonky breakdown that recalls Wowee Zowee-era Pavement, while Grey Hair is an upbeat jangle that would have slotted nicely into The Go-Betweens’ Bright Yellow Bright Orange.

The album’s best moments, however, are its two musically-austere bookends. Opener Breathless has a hymnal quality as, over a fuzzy guitar and an organ, Crutchfield picks apart the bones of a relationship (“You indulge me, I indulge you / but I’m not trying to have it all…”). It’s a beautifully intimate song. Seeing out the album is Bonfire where, again, Crutchfield creates something beautiful out of the sparsest components: a bassline that sounds like one of Kim Deal’s in the Pixies slowed down to funereal pace and a lovely, wordless hook.

Elsewhere, La Loose – with its Bontempi keyboard backing – flirts with cheesiness but its vague air of disquiet rescues it from novelty status. Less Than is the album’s despondent psychological lowpoint (“You’re less than me / I am nothing”). The straightforward acoustic strummage of Summer Of Love is the only track that could be played in a coffee shop.

Cerulean Salt was a tough album to top but, with this bleak yet beautiful follow-up, Crutchfield might have done just that.