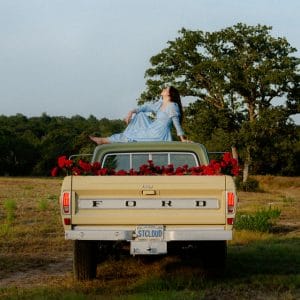 Katie Crutchfield’s fifth album under the Waxahatchee moniker feels a bit like a rebirth, which is appropriate as it’s her first album since giving up drink a few years ago. This new sobriety means Saint Cloud is her most accessible record yet – miles away from the angry grunge of her last album Out In The Storm, or the lo-fi rudimentary sound of her debut American Weekend.

In fact, Saint Cloud most recalls Crutchfield’s breakthrough album, 2013’s Cerulean Salt. Brad Cook’s production gives the 11 songs a nice, radio-friendly sheen, and there are times that the tracks lean towards country-rock – although more in the rootsy shape of Lucinda Williams than anything likely to conjure up visions of cowboy hats and plaid shirts.

Crutchfield’s voice remains the major draw, capable of invoking emotions like yearning and regret, even in the most upbeat of moments. Lead single Fire is one of the best things she’s ever done, a beautifully crafted ode to self-acceptance, with lines like “If I could love you unconditionally, I could iron out the edges of the darkest sky” nodding at her recent sobriety.

There’s also a breeziness to much of Saint Cloud which keeps you coming back to it – Can’t Do Much brings up those Lucinda Williams comparisons again, a love song that captures the intensity of an early relationship while also remaining cautious of getting hurt: “I love you that much anyhow, can’t do much about it now.”

Lyrically, as you’d expect given Crutchfield’s recent experiences, there are lots of allusions to addiction and recovery. War is about self-discipline and living without your addictions, as lines like “If I kept a parasite around, I’ll keep lying to myself” demonstrate, while the beautiful Lilacs looks at co-dependant relationships (“I won’t end up anywhere good without you, I need your love too”).

She’s also very adept at writing poetic lyrics that can easily conjure up images, as the dark Arkadelphia shows: “I lose my grip, drive out far, past fireworks at the old trailer park, and folding chairs, American flags, selling tomatoes for five bucks a bag.” It’s images like that which make you think that Crutchfield can’t be far from writing the next Great American Novel.

This all may sound a bit morose, but ironically, Saint Cloud contains some of Crutchfield’s most upbeat songs yet, at least in terms of melody. It’s easy to imagine the aforementioned Can’t Do Much or the gently rocking Witches becoming radio staples, while Ruby Falls has a lovely, swooning melody that shows off Crutchfield’s voice to its very best advantage.

With barely a weak track to be heard, it all adds up to an album that sees Waxahatchee move up to another level. It’s the sound of a woman at peace with herself, and Crutchfield’s newfound serenity makes for a wonderful listen.