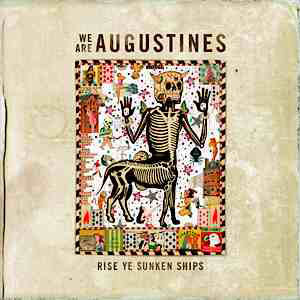 Brooklyn-based We Are Augustines are a trio partly risen from the ashes of quartet Pela. Billy McCarthy and Eric Sanderson began writing material for their new project long before the demise of their former band. Following difficulties with their old record label they made a point to become fully independent – their new album Rise Ye Sunken Ships is being released on a small label called Oxcart – and, with the help of producer Dave Newfield (Broken Social Scene) and new drummer Rob Allen, the new album is not only their debut LP but a fresh start for the duo.

And it suggests that We Are Augustines harbour big ambitions. There are many echoes of Bruce Springsteen at his most stadium rockish. Chapel Song begins rousingly with the kind of guitar melody that has more in common with the output of arena big hitters than a new outfit, whilst Book Of James has those drums from Born In The USA to mark its arrival as it plods along, picking up the pace towards the end when everything seems to collide together.

Then there are the lyrical clichés. McCarthy says in Headlong Into The Abyss that “we’ll raise a glass to borrowed cash” in a way that feels euphoric, if wearily resigned. East Los Angeles is littered with references to the highway, drinks and even the humble bar stool. But their one attempt at a barroom ballad, Barrel Of Leaves, is curiously when the stadium rock antics are reined in. It’s one of the best tracks to be found on the album.

Musically, with the odd exception here and there, it’s all set to be overloaded with pastiche; but that’s where their singer comes in. Billy McCarthy splurts out “shake, shake, shake like a leaf” and it actually sounds like he’s doing just that – it’s nervous, anxious and full of character. There are also moments in Book Of James when he seems to take on the role of a crazed evangelical preacher man. To his credit, he does it rather effectively.

Remove him from the equation and much of this record would be otherwise unremarkable. Patton State Hospital is not going to set the world on fire, whilst Augustine is a lacklustre attempt at hard-hitting indie pop and one of the few occasions when the vocals don’t hit the mark. Then there’s Strange Days, a filler track that meanders ineffectually into the middle distance.

When We Are Augustines play live, as they did on David Letterman’s late night show recently, not only do they grab your attention but they make you want to listen to their music. It’s a disappointment that their live energy hasn’t been replicated on Rise Ye Sunken Ships. This is a band that clearly can stir up an audience, so it’s a pity to find quite as many lightweight tunes amongst the genuinly good ones. Hopefully their follow-up won’t be a similar case of unfulfilled potential.