We Are Scientists – TV En Français 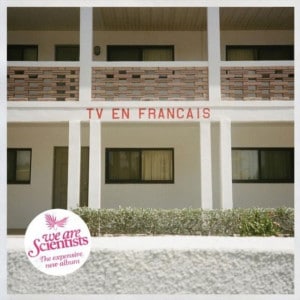 Coming (pardon the pun) almost four years after Barbara emerged, TV En Français is the fifth studio effort from Californian pairing Keith Murray and Chris Cain. With ex-Razorlight stick wielder Andy Burrows behind the drum kit as well as on keyboard duties, the usual suspects were all present and correct for producer Chris Coady (Yeah Yeah Yeahs, Yuck) to oversee during the New York recording sessions.

Confidence is evident and not only through the music, with the notoriously Nice Guys also stating “Goddammit, they’re good” when describing the new songs. And it would seem that the duo have been so prolific that they can afford to leave out last year’s enjoyable double A side single Something About You/Let Me Win without losing much sleep.

The pace throughout is more mid-tempo than anything else: opener What You Do Best epitomises this stance, emerging from behind an intro emanating just a slight whiff of Manic Street Preachers as the record slinks into view with melodic guitars abound. Make It Easy follows the same path, a constant guitar note accompanying Murray’s vocal before galloping drums and more guitar janglings lead to a more frenzied chorus, followed by racing guitars in the style of Editors.

Sprinkles is another easy paced effort, driven by an amplified bassline and rather annoying ‘ooh ooh ooh’ vocals that would surely have carried more weight if performed by a guitar. The chorus is unexciting, something akin to some of the band’s earlier material where they aim for a big chorus that isn’t quite reached. Overreacting benefits from a delightful, chiming guitar melody interspersed between quieter keyboard backed verses, but again the chorus sounds familiar and plain, with the ‘warning! red alert’ flavour they so often produce failing to ignite the track.

The rather misleadingly named Slow Down does in fact speed things up, raucous guitars racing along at breakneck speed and the Wolfmother-like riff of Dumb Luck provides another upbeat, bouncy moment, its driving guitars and pummelling drums sitting neatly alongside harmonious vocals for a better, keyboard assisted chorus.

Don’t Blow It is probably the best of the mid-tempo efforts, its poppy catchiness and minimal instrumental accoutrement leading to one of the more memorable choruses, whilst album closer Take An Arrow closes in similar fashion: a piercing guitar introduces the song until a bassline coupled with vocals leads into racing guitars and a sing-along chorus.

But it’s the slower songs on the album that steal the limelight. Courage opens to drumstick clicks and an arpeggiated guitar line before embarking on a fleetingly anthemic, ballad-like journey, asking “where is your courage?” – a major highlight, but nothing in comparison to the album centrepiece, Return The Favor. The track opens to a touch of glistening Interpol-like guitars and ticks along gorgeously before a burst of brilliant guitaring soars into view like a magnificent bird of prey to produce one of the best songs the band have ever recorded.

Whilst unlikely to have you ripping all your clothes off and celebrating in masturbatory style, TV En Français is undoubtedly an effort worthy of attention. And there’s plenty of evidence here to suggest that it has enough staying power to see you through far more than a quick two minutes of fleeting pleasure. All in, this is a welcome return.