We Were Promised Jetpacks – Enjoy The View 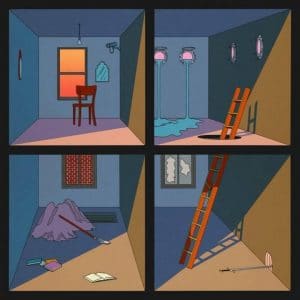 The fifth album from We Were Promised Jetpacks throws out a bit of a curveball at the start. Best known for being part of the mighty Scottish rock triptych, along with Frightened Rabbit and The Twilight Sad that emerged in the middle of the last decade, they’ve built their reputation on driving, intense rock.

Which makes opening track Not Me Anymore so disarming. Here is a soulful, synth drenched pop tune with some reflective vocals from Adam Thompson about breaking with the past, changing and making a new start. It sounds strangely like the early material from Guillemots, and totally different to anything they’ve done before.

After that, we’re back on more familiar ground. Fat Chance is one of the best things they’ve ever recorded, an outstandingly catchy guitar anthem, with Thompson’s Edinburgh accented vocals on soaringly top form. You’ll be singing along with it after just one listen – while it’s not exactly pop, it’s certainly one of the band’s more accessible songs, and could prove to be that cross-over hit that’s evaded them for so many years.

The recording of Enjoy The View hasn’t been without its pitfalls. Back in 2019, guitarist Michael Palmer left the band, meaning that this record is the first that’s been recorded as a trio. Then, like every other record released recently, it was recorded under lockdown conditions. You’d think this would all result in a slightly disjointed record, but that’s not the case.

Whether it be breezy indie-rock (the aforementioned Fat Chance or If It Happens) or the more intense, guitar-heavy tracks like All That Glittered, it’s clear that We Were Promised Jetpacks still know how to make one hell of a racket. There’s a palpable energy soaring through Nothing Ever Changes which makes it sound almost like a live track, and they know when to rein it in too for a more wistful number like What I Know Now or the closing, steadily building tones of Just Don’t Think About It.

This hopping around from genre to genre could be disorientating for some, but like their contemporaries The Twilight Sad, there’s a raw power pulsating through every track; at one moment, If It Happens seems to transform into a full-on, heads-down post-rock anthem, while the ringing guitar introduction to …I Wish You Well sound almost like a statement of intent.

Enjoy The View will undoubtably please the army of existing Jetpacks fans, yet tracks like Fat Chance could well bring in some new fans. Few bands can still sound on top of their game after 18 years or so, but We Were Promised Jetpacks do, and sound like they’re more than ready for the next 18 years too.

We Were Promised Jetpacks MP3s or CDs

We Were Promised Jetpacks on Spotify