We Were Promised Jetpacks – In The Pit Of The Stomach 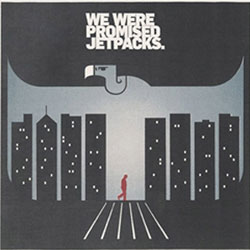 There is a fire in the belly of We Were Promised Jet Packs (WWPJP). Fuelled by youth, ambition and surges of Celtic aggression, In The Pit Of The Stomach manages to combine expansive and clever rock with a large dose of rawness and urgency on the side.

Those who remember Idlewild or Biffy Clyro before they homogenised their sound and moved from the likes of Nice N Sleazy to sell out stadiums, will inevitably draw comparisons. Not only fellow countrymen, WWPJP also owe some of their sound to bands like Fugazi or The Wedding Present when they show their more urgent side. What expands their sound is another tendency, one which is sprawling, broody and much more visceral. It’s these two competing slants that form In The Pit Of The Stomach.

Opener Circles And Squares clatters into life with scatter brain crash bang drums before startling into a military beat and urgent guitar before an indie chant a long ending. It’s the sound of a band that want to tick several rock boxes at once and a good overview of In The Pit Of The Stomach; WWPJP have a youthful urgency throughout, but they keep on pushing it to sound, well, bigger.

That ambition is something WWPJP seem to pick up and toss down at will and is ultimately what prevents this from being a much better album. In music, as in life, being able to something well is often better than being average at everything. WWPJP don’t nail either style, or coherently mix the two, preferring instead to chop and change at will.

They flit between straight up big chorus indie (Medicine), lead singer Adam Thompson evoking a young Roddy Woomble to something far smarter. Act On Impulse, the first single from In the Pit, builds duelling, swirling guitar riffs into an echoed introspective vocals “you were dead when we arrived/you died on impact”. It feels like elementary Mogwai or a more expansive track by label mates The Twilight Sad.

Likewise, Sore Thumb is a prog-indie monster with the bare minimum echo chamber vocals and tremolo guitars. It’s smart and equally haunting and surely an example of where WWPJP excel creatively. Compare this to Human Error, with it’s short, sharp riffs repeated vocals and three minutes of early Biffy esque, simple Scot rock and it’s almost like you have stumbled across a different band.

In The Pit Of The Stomach isn’t a stand out example of epic, void filling rock. It doesn’t have enough memorable riffs or vocals to be a chart bothering mainstream indie contender either. WWPJP are a hybrid, not quite matching the heights of many who have come before in either category. But this record is laced with intention and ambition, as well as a hunger and fire that keep it together, just. WWPJP may evolve like their predecessors or they might not, but listening to them work it out might just be worthwhile enough for some.

We Were Promised Jetpacks MP3s or CDs

We Were Promised Jetpacks on Spotify