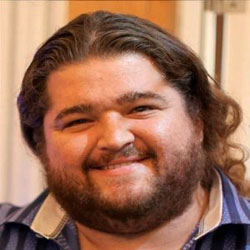 There are two camps of Weezer fans: those who will only love the first two albums, no matter what Rivers Cuomo and company do, and those who are along for the ride to either enjoy the craziness or rubberneck the train wreck.

Somehow, though, it seems that Weezer manage to continually inspire interest and anticipation from both sides of the aisle. This time round, with their eighth album, Hurley, it’s their jump to Epitaph after being with Geffen since the beginning of time. And then, there’s that ridiculous album cover, a grinning – and somehow grin-inspiring – photo of Lost‘s Jorge Garcia.

And after a three-album run of divisive albums (Make Believe, The Red Album, and Raditude), Hurley strikes a chord that has been missing in Weezer’s music since Maladroit. Hurley is, by no means, a return to Pinkerton form, but it’s damn close. Sure, there’s the oddball misstep (namely Where’s My Sex), but for the most part, Hurley finds Weezer in a very good place. It’s a strikingly – and surprisingly – scrappy album, personal and self-deprecating at times, hysterical at others.

Their newfound indie-ness has perhaps inspired Weezer to take a chance with sanding the polish that had grown recent sound. And while they could never completely capture the garage-rock offhandedness of Pinkerton, Hurley smacks of something genuine. And while that genuineness is occasionally hidden under layers of surf-rock background vocals (Ruling Me) and orchestrations (Unspoken), it’s there on display for the first time in nearly a decade. And that’s something to get excited about.

Memories opens the album with a tuning-up string orchestra, but they’re quickly replaced by the kind of thick, sludgy post-grunge fuzz that guitarists Cuomo and Brian Bell have championed even in the height of their pop-radio days. Cuomo sings of the glory days of alternative rock, when “Audioslave was still Rage,” and “all the freaky Danish kids vomit, then have sex.” By the end, Cuomo laments, “I gotta get my groove on, because I’m freakin’ bored,” and Hurley largely succeeds in living out this mission statement.

Ruling Me is vintage Weezer, with chugging guitars that compare favourably to The World Has Turned And Left Me Here. Trainwrecks sounds alarmingly like a Switchfoot outtake, with Cuomo aping Jon Foreman’s tenor growl. It’s another of Cuomo’s trademark jabs at his critics. “We’re still kicking ass. We’re trainwrecks,” he sings, and even as the computerised blips try to shanghai the soundscape, the guitars and general slacker attitude (“Mooching off our friends is not a federal crime”) corral it nicely.

Unspoken is acoustic balladry, finished off by huge distortion and driving drums (that sound exactly like what Weezer fans have been waiting for). Where’s My Sex is a joke that wears thin after a few listens (Cuomo sings lines like “Making sex is a family tradition,” and “I can’t go out without my sex”). Cuomo teamed up with Ryan Adams for Run Away, and the alt-country influence shows, changing things up a bit, and not badly.

Run Away mixes the musicality of Weezer’s later stuff with Cuomo’s sloppy, desperate-sounding vocal delivery from the early days (“I’m waiting for a chance to show you how I long to be”). Smart Girls drives with electronic drums (but it mostly works), and Brave New World builds to over-the-top heights, revealing – ever so briefly – Cuomo’s obsession with hair metal. And Time Flies closes the album with an almost impossibly DIY-sounding acoustic track (barely audible behind the tape hiss and warbling) about growing old.

All told, Hurley is a near return to form for Weezer. Indeed, it’s exactly the album they needed it to be, and it could just be enough to keep both camps of fans interested. They still joke around, but this time, they’re not peddling Snuggies. Weezer are finally getting back to being comfortable in their own skin after years of awkward radio aspirations.