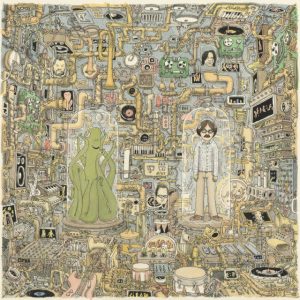 Originally recorded back in 2019, OK Human was shelved when Weezer got the call to go on a stadium tour with Green Day. Feeling that the sweeping orchestral approach probably wasn’t what stadiums of pop-punk fans would be particularly jazzed about, the band set about work on their Van Weezer album. That particular project was to be a celebration of all things hair metal, but then, as is fast becoming the explanation for everything at the moment, covid happened. Big hair metal probably isn’t what’s required for months/years inside, so the Rivers Cuomo returned the band’s focus to OK Human.

The first thing to note about OK Human is that there’s nothing in the way of fuzzed up guitars anywhere on the record. Instead, this is a Weezer album that embraces grand orchestration, with sweeping strings and heartfelt piano gracing almost every song. There’s still a general pomp rock aspect to OK Human, most notably in the drumming, and Weezer’s way with a melody and a hook is still very much in evidence. It might be a slight left turn, but it’s unmistakably the band that made Hash Pipe and Beverly Hills. The album really succeeds in its way of wrong footing expectations. On first listen, it sounds light and breezy, almost throwaway and lacking in substance, but it doesn’t take too long to unfurl and show its true colours.

All My Favourite Songs opens the album, and it’s seemingly about depression. “All my favourite songs are slow and sad,” Cuomo croons, “all my favourite people make me mad… I don’t know what’s wrong with me.” It feels like he can’t quite get a handle on the changes that are happening in his life. These changes could be depression, but they’re also the experiences of people rattling around their homebound prisons during lockdown slowly losing their minds. Favourite people suddenly become irritating and there’s longing for any kind of human contact. As Cuomo sings, “I need a friend when I take a walk,” and he’s not wrong. Weezer are masters of combining sweeping pop majesty and juxtaposing it with darker themes so that it’s easy to miss what’s at the heart of their songs. Singing “I don’t know what’s wrong with me” in the tub with carefree abandon is entirely possible, and that’s Weezer’s musical sleight of hand in a nutshell.

There’s no doubt there’s a fair amount of Cuomo addressing the the darker side of the human experience and the effects of being locked in and stuck in a rut here. On Allo Gobi he doesn’t want to sit next to humans and talks about the same old dull routines. On Grapes Of Wrath, he’s hiding under a blanket, wanting to stay there forever whilst listening to audiobooks, drifting off to oblivion and not caring about anything. On Numbers he talks about the frustration and hurt of being rejected because of your differences, “they say that you’re too short to join the team, and your IQ’s too low for poetry”. With Screens he takes aim at the disconnect people have with each other because they’re so engrossed in their phones and technology. Mirror Image finds heaven shutting the door on Cuomo as he contemplates the day death separates him from his wife.

So there’s certainly some darkness at play on the album, how could there not be when OK Human hints at the disconnect of Radiohead‘s OK Computer. However, after a storm, there’s often a rainbow, and there’s a flip side and a positivity to almost every song on the album. It’s quite often found in the careful orchestration, which is never allowed to venture into overblown territory, or in Cuomo’s way of writing finely crafted pop hooks. Dig deeper into the lyrics however, and there’s positivity in times of trouble. Here Comes The Rain was written to explain to Cuomo’s friend how to deal with online trolling. It could have been an acidic riposte, but instead, it’s a jaunty number that owes a lot to The Beatles. The rain doesn’t soak Cuomo or make him downhearted, instead, it washes his troubles away.

Bird With A Broken Wing marries the orchestration of Lou Reed‘s Sad Song (from Berlin, Reed’s bleakest album) and Paul McCartney‘s poppier moments. It acknowledges that even though you might be damaged and ignored, you’ve still got a voice and something worth saying. More importantly, you’re worth listening to. “I’ll belong to you if you believe in me,” he sings in one of the albums most passionate moments, “I’m right where I want to be”. It’s a song of self belief in the face of adversity.

The flip side to Numbers is the offer of support when you’re feeling battered and down, and the importance of strength in numbers is writ large with the line “when we love and the two becomes one”. Playing My Piano might make Cuomo sound like a man who ignores his family and persona hygiene in order to hammer away at his piano, but the ability to get lost in the creative process and music is an undeniable joy. Mirror Image might be about the fear of losing the person you love, but there’s love woven into every note. These moments of light and shade are everywhere on OK Human, and in addressing them Weezer have made one of their most catchy and insightful records to date. Covid might have derailed the band’s plans, but as the short but sweet instrumental towards the end of the album states, Everything Happens For A Reason.