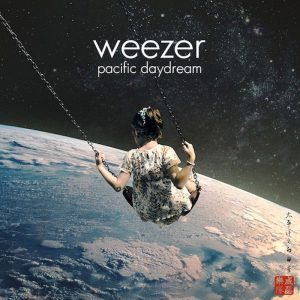 Weezer return with Pacific Daydream, an album which boasts of being abstract and on another level. For their 11th record, the Los Angeles band were inspired by a Chinese proverb that focuses on a theme of reality and real life becoming blurred. With a starting point such as that, the listener could be forgiven for expecting something experimental; possibly a little psychedelic or even a bit trance-like.

In reality, it offers more of the same: the usual soft rock. Which is no great surprise, as Weezer have spent the last 25 years honing what they do, to great success. But things don’t start off all that well with Mexican Fender, a forgettable offering which leaves you fearing the worst.

But thankfully, after the first couple of tracks, Pacific Daydream starts to come into its own. By some distance, Weekend Woman is the best offering from the record. It is a deep and meaningful bittersweet love song. During it, singer Rivers Cuomo focuses on the feelings someone can still have for a long-lost love even a decade on.

“We fell in love on a Sunday and Monday morning I drifted away – all I want is to see her,” he sings. “How was I was supposed to know the ABCs of love?” This melancholy approach to love and heartbreak continues for much of Pacific Daydream with QB Blitz being a good bedfellow for Weekend Woman.

Another highlight of the record is Get Right, a defiant anthem. This song, like many of the better moments from Pacific Daydream, adopts a tranquil quality to taking on some of life’s harder moments, very gracefully created by Cuomo’s recognisable soft vocals.

It is a real pity that for all these accomplished moments there are others where Pacific Daydream really misses the mark. Like for example, where Weezer make a pretty cringy approach to attempting hip hop. Arguably, the lowest point comes with Beach Boys, a very on-the-nose homage. Questionable lyrics include ‘turn it up, it’s the Beach Boys, singing out in a sweet voice’ and ‘it’s the Beach Boys, making my eyes get moist’. The track concludes with a distorted voice-over which successfully contributes to making it even worse – something which felt impossible.

Pacific Daydreams certainly doesn’t achieve the grandiose aims from the aforementioned inspiring proverb. That said, thankfully it is still a solid record which should satisfy fans. There are few tracks which will trouble Weezer’s established crowd pleasers like Island in The Sun, Buddy Holly and Beverley Hills, but as with The Killers’ latest record, Wonderful Wonderful, there’s a nice bit of depth to be found.