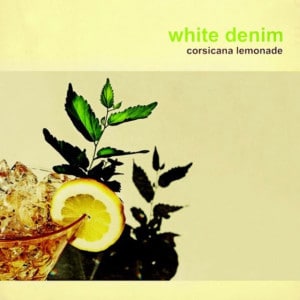 Listening to an album from Austin guitar loop enthusiast foursome White Denim can be an exhausting experience. As inventive as they are in drawing influences from blues, punk, psychedelic rock and soul, their ideas and, subsequently, their music can be all over the place, and with so many factors at hand, they often have to hit just the right combination of notes for the music to succeed. On their latest release, Corsicana Lemonade, the band ventures heavily into the soul realm of their influences.

While the jaw-dropping fretwork and complex song structures are still there and the band does not scale back on the musicianship, the songwriting is improved, making potentially crowded songs more captivating. And front man James Petralli’s raspy vocals give White Denim’s music a retro sound that could render them poised to capture more mainstream love from festival heads and fans of acts like The Black Keys. Overall, just the right mix of old and new makes Corsicana Lemonade White Denim’s best album since 2009’s great Fits.

To start, the album begins with the attention-capturing Opener At Night in Dreams, whose guitars charge along like Steely Dan on cocaine. But even while the song rocks and also sounds like Thin Lizzy fronted by a blue-eyed soul singer, it sees Petralli singing about getting older and looking back, a topic that’s hardly rock ‘n’ roll. Ultimately, what’s so effective about Petralli’s existential crisis put to music is not its execution, but its concept: taking a topic normally captured by insular singer/songwriters in dimly lit bars and playing it over a meticulous, but still somehow loose rock soundtrack. It’s as if Petralli is relating with his audience and somehow commenting that getting older is something both he and the bands’ fans go through. In essence, the music is a celebration of the human connection rather than a separatist pity party. Even on the title track, which contains the most references to Texas (the most homebody state in America) on the album, Petralli and company invite outsiders in through the music.

What’s more impressive about Corsicana Lemonade, however, is that both the songs and the album actually logically travel instead of trying to jam-pack ideas. Take New Blue Feeling, which starts out somewhere in between a glam rock tune and Tame Impala’s Apocalypse Dreams and naturally ends up sounding like Petralli fronting Paul McCartney and Wings. Meanwhile, Come Back follows New Blue Feeling; while Come Back brings about comparisons to another combination that will never happen (Jamie Lidell fronting Lynyrd Skynyrd), the tying thread between it and New Blue Feeling is Petralli’s delivery, his impassioned pleas not for sympathy, but for someone to celebrate getting older with him.

By the time the jazzy Distant Relative Salute – chock full of impressive drumming from Joshua Block – comes along, Corsicana Lemonade has already been partying for a while. But that’s no reason for them to refrain from changing things up a little further, tweaking the sound White Denim have explored on the album until the foursome reaches perfection. Distant Relative Salute is the album’s showstopper and achieves its status as such not through crazy guitar solos, but through the juxtaposition of tight musicianship and Petralli’s unhinged soul.

In sum, the songs on Corsicana Lemonade are of such high quality that it’s hard to differentiate which is produced by Wilco’s Jeff Tweedy (one of these being lead single Pretty Green). Because, like the best Black Keys songs, the band’s tracks hold up independent of their pristine production as examples of how to combine undeniable talent, a love for the past, and a personal story to create a sound that’s simultaneously throwback and unique.